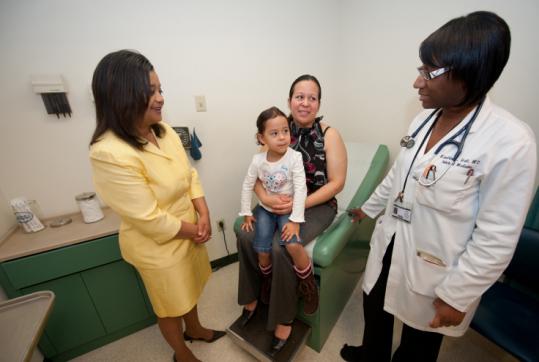 Dr. Jasmin Chapman, chief of a Mississippi clinic (left), says uninsured “are falling through the cracks’’ in getting care. (James Patterson for The Boston Globe)
By Christopher Rowland Globe Staff / April 20, 2011

YAZOO CITY, Miss. — The plight of health care’s have-nots is vividly illustrated alongside a highway on the outskirts of Yazoo City, the hometown of Mississippi governor and potential Republican presidential candidate Haley Barbour.

Tucked into a crumbling strip mall with a dollar store called Dirt Cheap, a bare-bones clinic with a peeling facade serves dozens of impoverished patients daily. It is among the limited sources of primary care for about a half million residents who lack insurance in Mississippi, 18 percent of the population.

But while many of the clinic’s patients stand to gain insurance and access to better health care under the national overhaul signed last year by President Obama, Barbour says Mississippi does not want the help. Instead, his calls to throw out the overhaul and the massive expansion of Medicaid at the core of the law are becoming the centerpiece of his emerging candidacy.

His attacks baffle and infuriate health care advocates and physicians who work closely with the state’s most disadvantaged patients. They contend that Mississippi — the poorest state in the country, with the highest incidence of obesity — is among states most desperately in need of the broader coverage. They are especially dismayed because they view the law as a great financial deal for the state: The federal government will pick up 100 percent of the cost of the Medicaid expansion from 2014 to 2016 and 90 percent of the cost after 2020.

“It makes no sense at all. It is penny-wise, pound-foolish,’’ said Dr. Nate Brown, medical director of the Delta Health Center in Mound Bayou, a clinic for the poor and disadvantaged founded in the 1960s with backing from Tufts Medical School. Barbour, he said, appears to be out of touch with low-income people.

“They are not the people he rubs shoulders with on a daily basis, and they might not be people who voted for him,’’ said Brown. “But as governor he still is supposed to represent the entire population.’’

The debate in Mississippi puts a state-level spotlight on the ideological and financial issues at the core of the intense national fight over health care. Governors in conservative-leaning states with the highest rates of uninsured, such as Mississippi, are among the most vocal opponents of what they call “Obamacare.’’ Barbour is a leader among Republican governors challenging the law, through court action, congressional testimony, and his political attacks.

Medicaid, the federal health program for the poor, is administered by states, which also pay a portion of its costs. The national overhaul law could result in new Medicaid benefits flowing to 300,000 to 400,000 Mississippi residents, according to various state estimates.

Making Medicaid more generous also was a key element of the 2006 Massachusetts law to achieve near-universal coverage, and Barbour has been critical of that effort as he prepares a possible primary bid against its architect, former Bay State governor Mitt Romney.

Barbour calls such expansions a step on the path to a government takeover of health care. He says the national plan imposes expensive burdens on states.

“If it was such a great idea, why are they dumping part of the costs on states?’’ Barbour said in a telephone interview.

The Obama law will expand Medicaid eligibility to individuals making up to $14,400 or $29,300 for a family of four — 133 percent of the federal poverty limit.

An independent study the governor commissioned says the state’s share of expanding the Medicaid eligibility umbrella, while starting at zero, could climb to as much as $237 million a year by 2020 — when the state would have to start picking up 10 percent of the cost. Estimated total costs of the health overhaul, including administrative costs and the impact of new Medicaid enrollees who qualify now but have not signed up, will add $1 billion to $1.7 billion to the state budget by 2020, with the federal government kicking in up to $17 billion, the study said.

The governor questioned the need for such a huge government effort. He also suggested in the interview that the plight of Mississippi’s uninsured residents is exaggerated by advocates.

“There’s nobody in Mississippi who does not have access to health care,’’ Barbour said. “One of the great problems in the conversation is the misimpression that if you don’t have insurance, you don’t get health care.’’

Hospitals and doctors in the state routinely provide charitable care, he said. Residents also can get care from clinics such as the one by the side of Route 49 in Yazoo City, as well as larger and better-equipped community clinics scattered around the state. And Barbour pointed to his efforts in the Mississippi Legislature, unsuccessful so far, to win passage of a voluntary insurance exchange where small businesses and individuals could shop for insurance at discount rates.

Barbour backs a plan passed by the Republican-controlled US House on Friday to transform Medicaid into a block-grant program, giving states broad leeway to manage care for the poor within their own borders.

In the Globe interview, Barbour said that covering more people with health insurance will not solve Mississippi’s deep societal problems. It ranks last among states in poverty and in a variety of health measures. It has more than its share of obesity and diabetes, which result in high rates of heart attack and stroke. Because the state is in such dire straits economically, the federal government already pays better than 75 percent of Mississippi’s Medicaid program, compared with most other states, which split the costs evenly.

“I grew up in a society where if it wasn’t fried you were asking, ‘Why not?’ If it was good you would make it even better with a lot of sugar and butter on it.’’

He added that substance-abuse prevention and encouraging healthier diets do not require a massive expansion of Medicaid.

Barbour has drawn fire in Mississippi for aggressively seeking to control the Medicaid rolls by requiring annual, face-to-face eligibility checks for beneficiaries, including children. It is the only state in the country that requires such strict checks, advocates say.

Barbour explained that he is attempting to make sure people are not scamming the system and the state’s costs are no higher than necessary. The goal, he said, should be to encourage people to find private insurance and take care of themselves.

“The principal reason [Medicaid] rolls go down is job creation. People go to work, and they are no longer eligible for Medicaid,’’ he said. “It’s good for people to be self-reliant.’’

Yet many Mississippi residents in line to get the expanded Medicaid coverage already have jobs. The problem is they have low-wage jobs with no insurance. Medical practitioners at a clinic in the capital city of Jackson said they care for thousands of patients who earn too much to qualify for Medicaid but not nearly enough to purchase private insurance. Such patients are required to pay doctor’s visit fees on a sliding scale.

“They feel like they can’t go to the hospital unless they are so ill they are crawling there,’’ said Mark Probst, director of radiology at the Jackson-Hinds Comprehensive Health Center, where 52 percent of the patients have no insurance.

Advocates said the Medicaid expansion will allow patients to receive preventative care, get diagnostic tests, and establish a relationship with doctors, in an effort treat patients before they become desperately ill.

“There’s still a lot of people who are falling through the cracks,’’ said the clinic’s chief executive, Dr. Jasmin Chapman.

The high rate of uninsured means that diabetics are not getting tested appropriately and cannot afford their medications, said Roy Mitchell, director of the Mississippi Health Advocacy Program and a frequent critic of the governor’s policies. That translates into preventable — and expensive — complications such as strokes and heart attacks.

“There is a lot of needless suffering,’’ he said. “But this is Mississippi. People suffer.’’

Christopher Rowland can be reached at crowland@globe.com