THIS STORY HAS BEEN FORMATTED FOR EASY PRINTING
A FISCAL SHOWDOWN 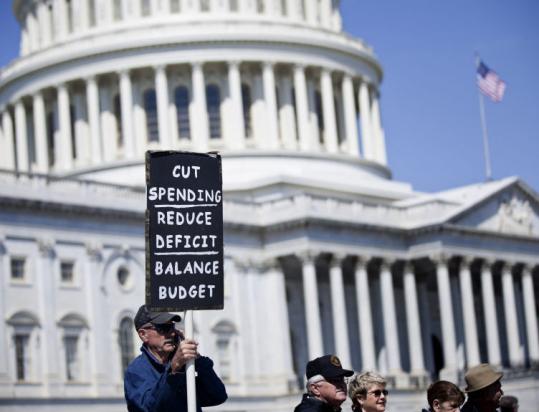 Tea Party activists gathered on Capitol Hill this week to back federal budget cuts. The budget drama shows the movement has become a disruptive but powerful force within the GOP. (Brendan Smialowski/AFP/Getty Images)
By Matt Viser Globe Staff / April 9, 2011

WASHINGTON — Americans learned yesterday the full power of the Tea Party, with newly elected conservatives calling the shots in the House rather than railing against government from the sidelines. For many in the movement, pushing the government to the brink of closure was a crowning achievement, an emphatic statement that spending must be reined in — and now.

“It’s a victory for the American people,’’ declared Representative Allen West, Republican of Florida. “When you look at what has happened over the past few years — where we’ve had these astronomical debt and deficits — it’s amazing how we’re actually having a conversation in Washington, D.C., about spending cuts.’’

But for those outside the movement, it put on full display the uncompromising principles of the far right, showing that Tea Party-aligned lawmakers are so ideologically rigid they will throw sand into the gears of government to prove their point. Democrats questioned why conservatives who campaigned on creating jobs were so eager to furlough 800,000 government employees and freeze their paychecks.

“The Tea Party is trying to sneak through its extreme social agenda,’’ Harry Reid, the Senate majority leader, said yesterday.

The Tea Party movement coalesced shortly after Obama’s election more than two years ago, motivated largely over bank bailouts and the federal stimulus. It exploded during the health care debate and then effectively tapped into voter anger over the economy and the Democratic agenda to give Republicans momentum for the 2010 midterm election.

In doing so, it upended many GOP establishment candidates in primaries across the country. And this week’s budget drama demonstrates how it has grown to become a disruptive but powerful force within the party, as House Speaker John Boehner sought to balance the demands of new conservatives in his chamber with the political dangers of a shutdown.

“Listen, there’s no daylight between the Tea Party and me,’’ Boehner said Wednesday in an interview with ABC News.

“What they want is, they want us to cut spending,’’ he added. “They want us to deal with this crushing debt that’s going to crush the future for our kids and grandkids. There’s no daylight there.’’

Tea Party activists were almost giddy yesterday that the influence that began to build last year shows no signs of subsiding. “Shut it down. Shut. It. Down,’’ said Christen Varley, president of the Massachusetts-based Greater Boston Tea Party, referring to the threatened government shutdown.

Matt Kibbe, the president of FreedomWorks, which has helped mobilize the Tea Party movement, said this week’s developments represent “total victory’’ for the Tea Party.

“We’ve fundamentally reframed the debate,’’ he said. “Everybody is debating now how to balance the budget and what do we need to cut. The Democrats are now forced to come to our table and cut.’’

Democrats are trying to capitalize on that shift. Longtime Democratic consultant James Carville yesterday sent out a fund-raising letter that said: “John Boehner and his radical band of Tea Party bosses think they can get away with political blackmail by shutting down the government, just to advance their radical social agenda.’’

But such talk belies the point made by several political observers, who said Tea Party agenda is dominant in Washington right now.

“They’ve nudged the Democrats and the president to much higher spending cuts than they wanted,’’ said Julian Zelizer, a presidential scholar at Princeton University. “They’ve gotten it to the point that everyone agrees government needs to be cut. The debate is about how much to cut government, rather than whether to cut it.’’

A few cracks have emerged within the Tea Party movement over tactics. Some have denounced the negotiations, saying House GOP leadership wasn’t going far enough in the budget cuts. Others within the movement are seeking a compromise so work can begin on deeper fiscal issues, such as overhauling Medicare and Medicaid.

“We should be fighting over trillions, not billions. We should be defunding ObamaCare, but we’re not,’’ Representative Michele Bachmann, a Minnesota Republican who is weighing a run for president, wrote yesterday in a blog post. “I am ready for a big fight, the kind that will change the arc of history.’’

Representative Steve King, an Iowa Republican, also claimed this week’s battles were not sweeping enough. Like Bachmann, he said he will not support any deal because it’s unlikely to strip funding for President Obama’s health care plan.

“I’d sure like to see the Tea Party ramp up,’’ King said. “They’re going to look at this and decide that they have to turn it up and engage more and build more personal relationships with those they helped elect.’’

Tea Party activists had wanted at least $60 billion in cuts — the amount originally passed by the House — not the $39 billion tentatively agreed to last night. They said they were unafraid of political fallout.

“We’re not worried about a government shutdown,’’ said Shelby Blakely, a member of the national support team for the Tea Party . “For us it’s either a temporary shutdown while we get our house in order — or a permanent shutdown where America doesn’t get up off the mat.’’

“Honestly I think [a shutdown] would be a welcome change,’’ she added. “It would say to the American people that the people we elected are willing to do what we want them to do.’’