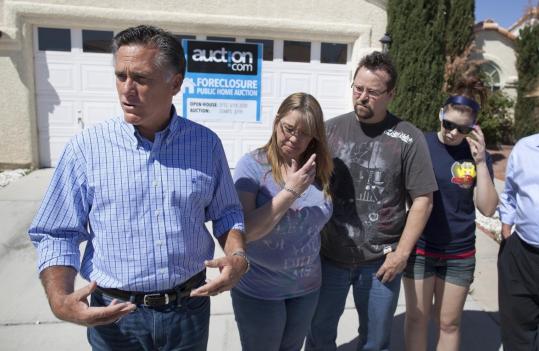 Potential presidential candidate Mitt Romney spoke with reporters after touring a Las Vegas neighborhood hit hard by foreclosures. Next to him were Kathy and Dave Tyler and their daughter Allie. (Julie Jacobson/Associated Press)
By Matt Viser Globe Staff / April 3, 2011

LAS VEGAS — Four years ago at this time, Mitt Romney seemed to be everywhere at once, racing from appearance to appearance, and speech to speech, focusing with special zeal on the early primary states.

This time around, as a still-unannounced but all but certain contender, his strategy seems strikingly different: Don’t make noise. Be the grown-up in the mix. Dare, for the moment, to be typecast as dull.

It is the soon-to-end quiet phase of a campaign built to contrast, favorably, with the more combustible of his potential rivals. Donald Trump has been generating headlines by questioning President Obama’s US citizenship. Newt Gingrich has ex plained that his infidelity was a byproduct of all the hard work he was doing for the country he loves. Michele Bachmann said the Shot Heard ’Round the World was fired in New Hampshire.

Meanwhile, the former Massachusetts governor is traveling the country lining up campaign contributors, and making a tiny number of public appearances in early primary states, compared with his possible rivals. He has eschewed fiery speeches, Tea Party rallies, and the apocalyptic imagery.

“Every passing day that Donald Trump or Michele Bachmann or Newt Gingrich do and say things that are, to many, embarrassing, is a good day for Mitt Romney,’’ said Steve Lombardo, a Washington-based Republican consultant who advised Romney’s 2008 campaign but is not working for any candidate so far this year. “It’s yet another reason for the governor to stay above the fray in talking about big issues that affect voters, and not directly engaging the president in a personal way.’’

At a time when the Middle East is in turmoil and the nation’s economy is wavering, it is a strategy that seems designed to distinguish Romney as a candidate with appropriate gravitas for the White House, or at least to challenge the serious and detail-oriented commander in chief who currently occupies the Oval Office.

He has been popping up just often enough to keep his name in the national discussion. He has penned a handful of op-eds designed to highlight the economy and foreign policy, while granting few interviews.

“He’s trying to be the adult in the room,’’ said Mary Stuckey, a professor of communication and political science from Georgia State University in Atlanta. “People are worried about the Tea Party and they’re worried about the Republicans’’ currently attracting the most attention.

Romney advisers are confident that he will, when it matters, have the deepest national organization and the most money. And there are indications that in a war of attrition, he could be viewed by voters as the strongest candidate. A survey released in February by CNN/Opinion Research Corp. found that 68 percent said they would rather have a nominee who can beat Obama, compared with 29 percent who said they wanted a candidate who agreed with them on every issue that matters to them.

Because Romney already has high name recognition and a campaign apparatus largely intact, he has been able to bypass many of the public campaign activities other candidates are pursuing. Romney advisers seem thrilled not to have the attention. They have been trying to push the start of the race as late as possible — to preserve resources, and to prevent the onslaught of attacks that promise to be directed at Romney in debates.

But in the meantime, they are watching from the sidelines as candidates like Bachmann, Gingrich, and Trump dominate the airwaves and blogs.

“There is a gaping-wide opening for someone like Mitt Romney, who is a serious, statesmanlike potential candidate,’’ said one adviser, who spoke on the condition of anonymity because the campaign hasn’t been formalized. “Having him doing this preseason work, in a low-key fashion, is good. What you’re seeing with the rest of the field is leaving a vacancy for someone.’’

Over the past three months, for example, he’s made only two appearances in three crucial early-voting states — and both of those were in New Hampshire. By contrast, former US senator Rick Santorum of Pennsylvania has spent 20 days in Iowa, New Hampshire, and South Carolina.

For the same three-month period, Romney also has been on Fox News only twice, according to a compilation by Media Matters for America, a liberal media watchdog group. Mike Huckabee, who hosts a show on the network, has 40 appearances, including those for his show; Trump, Bachmann, and former Minnesota governor Tim Pawlenty have 14 apiece; Gingrich has been on the network 12 times.

“Mitt doesn’t feel the need to comment on every issue under the sun,’’ said Romney spokesman Eric Fehrnstrom. “He doesn’t take part in the nightly cable news wars. Usually, when he’s in the news, it’s because there’s something he wants to say.’’

Much of that is about to change, however, as Romney prepares to announce a presidential exploratory committee that will allow him to start raising money. Donors are pledging to raise at least $25,000 — and up to $100,000 or more — in order to help him make an emphatic statement before the first voters head to the polls.

His public schedule will also pick up, with particular focus on early-voting states of New Hampshire and Nevada.

Romney spent the past two days in Las Vegas, making his first public appearances in a month — a strikingly light schedule for a top-tier presidential candidate. During the visit, he focused on the two issues he wants to be most closely attached to: the economy and foreign policy.

On Friday, he toured a depressed neighborhood lined with foreclosed homes as he continued trying to criticize Obama’s handling of the economy.

Dressed casually in Gap jeans (slightly frayed at the bottom), black loafers, and a buttoned shirt, Romney attempted a lighter, more laid-back tone to counter the staid reputation he had during the last campaign. When he approached a small gaggle of reporters standing outside the home, he looked around, smiled lightly, and said, “Old friends.’’

While walking through the neighborhood, one woman stopped her Chevrolet Silverado and yelled out to Romney that she had voted for him in 2008. “It’s not every day I find someone who voted for me,’’ he joked.

When the woman, Jennifer Fung, drove back about 15 minutes later to ask for an autograph, Romney was happy to oblige. “If by some chance I become something someday, that might be worth saving,’’ he told her. “Otherwise, put it in the circular file.’’

Yesterday, after speaking for 45 minutes before the Republican Jewish Coalition, he declined to discuss any plans on running for president.

“I don’t have anything to announce,’’ he said as he walked to an escalator. When asked if he had a sense of timing for an announcement, he said, “I have a sense, and I’d tell you. But I don’t have one of those magic pens like they had on ‘Men in Black,’ where I could wipe out your memory.’’