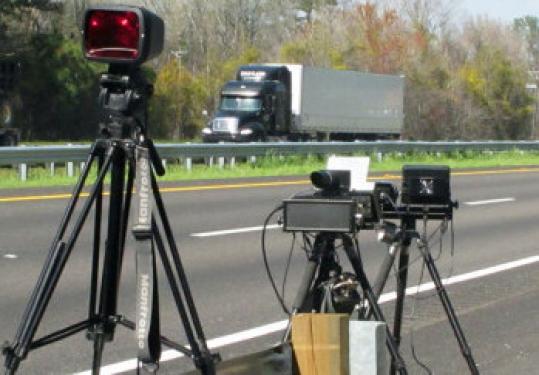 RIDGELAND, S.C. — Surveillance cameras along Interstate 95 in this small South Carolina town have nabbed thousands of speeders. They also have attracted heated opposition from state lawmakers and sparked a federal court challenge.

The cameras are the only such devices on the open interstate for almost 2,000 miles from Canada to Miami.

Ridgeland Mayor Gary Hodges said the cameras in his town about 20 miles north of the Georgia line do what they are designed to do: slow people down, reduce accidents and, most importantly, save lives.

But lawmakers who want to unplug them contend the system is just a money-maker and amounts to unconstitutional selective law enforcement.

Pete Strom, a lawyer in Columbia, filed a federal class-action lawsuit last year, contending that parts of the program are unconstitutional.

Earlier this month, Ridgeland Police Officer David Swinehamer sat in a van beneath an overpass as a radar gun in a thicket of electronic equipment outside clocked passing vehicles. A Mercedes with South Carolina tags sped by going 83 miles per hour — or 13 over the speed limit. A camera fired and pictures of the tag and driver appeared on a monitor in the van. The motorist continued north, unaware of the $133 ticket that would be following in the mail.

“I just don’t think it’s right,’’ said James Gain of Kissimmee, Fla., one of the lawsuit plaintiffs who got a ticket last year. “If you get a ticket you should be stopped by an officer, know you have been stopped, and have an opportunity to state your case.’’

Gain paid the fine, saying it was less expensive than driving six hours to Ridgeland for court.