83 patrons rescued from eatery on barge that floated away in Ky. 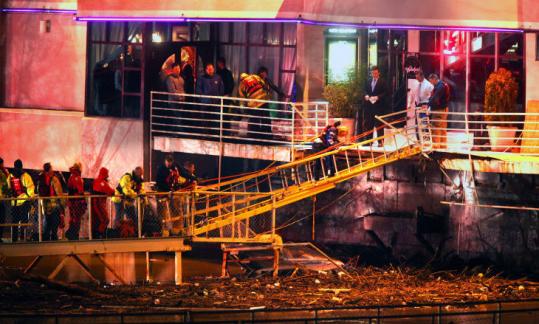 A woman walked down an improvised ramp, made of ladders and rope, from a barge in Covington, Ky., assisted by rescuers. (Carrie Cochran/ The Cincinnati Enquirer via Associated Press)
By Dan Sewell Associated Press / March 13, 2011

COVINGTON, Ky. — A seafood restaurant on a barge broke from its moorings on the flood-swollen Ohio River, then drifted downriver during the dinner rush before emergency crews rescued 83 patrons using a precarious gangplank of ladders and ropes, authorities said yesterday.

Covington Fire Captain Chris Kiely said diners at Jeff Ruby’s Waterfront restaurant used cellphones to call for help Friday night as the restaurant floated about 100 feet downstream. Everyone on board, including former star Cris Collinsworth, was safe after the hourslong rescue, Kiely said. All were led off one at a time, wearing life jackets.

TV footage of the rescue showed dinner patrons pacing aboard the barge as firefighters put up the makeshift bridge of ladders that spanned swirling, debris-filled water.

Patron Kathy Kinane said yesterday that she and her husband had been finishing their dinner with another couple when they felt a bump. Her husband, Bill, looked out the window and saw that the usually stationary boat was moving.

By then, a crowd had gathered by the exit. The walkway ramp had broken loose from shore.

Rescuers and tugboats arrived quickly, and the fact the power stayed on helped prevent a panic, she said. Outside, the current was moving very quickly. The Kinanes hadn’t been concerned about eating there because they had been there before when the river had risen, she said.

The Kinanes, frequent patrons of the restaurant, had worn snorkels and masks when they arrived to surprise the manager. They returned the gear to their cars — though Kathy Kinane joked they should have kept it with them.

Swollen rivers and other waterways also have overflowed their banks from Maine to Maryland, and officials yesterday were monitoring several that were on the verge of overflowing.

Major flooding has forced hundreds of people from their homes in the Northeast in recent days.

There were major concerns in New England that rising waters could break up river ice, creating ice jams that can cause flooding. New York, from Manhattan to the Canadian border, was under a flood watch as heavy rain and melting snow closed roads.

The flooding was also blamed for at least two deaths. A 74-year-old Pennsylvania man’s car was swept into Swatara Creek on Thursday in Pine Grove, about 75 miles northwest of Philadelphia. And a woman drowned in Ohio on Friday after getting out of her car in a ditch in Williams County.

Forecasters warned that the worst was yet to come for many areas, especially parts of flood-prone northern New Jersey that were under water after a storm that dropped as much as 5 inches of rain in some areas from Thursday afternoon through Friday morning. That came just days after most of the same areas — which are emerging from a snow-filled winter — were flooded by another round of heavy rains.

Hundreds of people were unable to return to their homes as major flooding continued yesterday morning along the Passaic and Raritan rivers in north New Jersey.

But conditions were improving in other nearby areas, where swollen waterways had mostly crested and were starting to recede.

The National Weather Service said no major rains were expected in New Jersey for several days, giving those areas a chance to dry out after the waterways drop back below flood levels.

But that provided little relief for residents who had to be evacuated from their homes and remained in shelters yesterday, unsure of when they would be able to return home and how much damage the floods had caused.

Flooding along the rain-swollen Susquehanna River in northeastern Pennsylvania prompted some road closures yesterday and sent water into some basements, but no serious problems were reported.