On day after Louisiana tornado, those left homeless struggle to pick up pieces 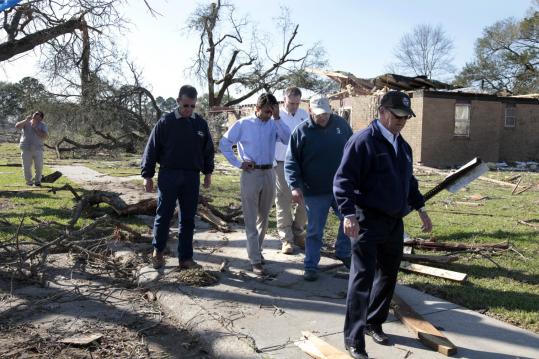 RAYNE, La. — About 1,500 people were unable to return to their homes in this community yesterday, a day after a tornado killed a woman and damaged or destroyed about 150 houses.

Jalisa Granger, 21, was killed when an oak tree crashed onto her house as she protected her toddler son. Her mother also was inside, and relatives and neighbors had to pull the victims from the ruins, said Maxine Trahan, a spokeswoman for the Acadia Parish Sheriff’s office.

At least 12 people had injuries that were not life-threatening, officials said.

Many residents whose houses were not damaged could not return yesterday because workers were still surveying damage and trying to get utilities running.

As the storm, with top winds of 135 miles per hour, roared over Pauline Patton’s apartment Saturday, she peered out the window and saw something she wasn’t ready for: a funnel cloud.

Suddenly, the power went out. As everything went black, she heard what sounded like a bomb exploding overhead.

Patton, 64, and her husband, Howard, were at a fire station-turned-shelter, courtesy of the Red Cross, yesterday. They weren’t sure if they would be able to return to their apartment.

The hardest-hit area in Rayne, which is 70 miles west of Baton Rouge, has mostly of low- to moderate-income homes.

“My heart goes out to the residents because a lot of them don’t have any insurance,’’ Trahan said.

Among those without insurance are Diane Wheeler, 45, and her husband, Anthony Rochony. They were staying at the Red Cross shelter.

The couple didn’t hear the tornado as it slammed into their home, ripping off the roof. Wheeler said she flipped over a couch and tried to hide beneath it while her husband lay nearby on the floor. His arm was cut by a shard of flying glass, though she emerged unscathed. “I was scared, very scared,’’ she said.