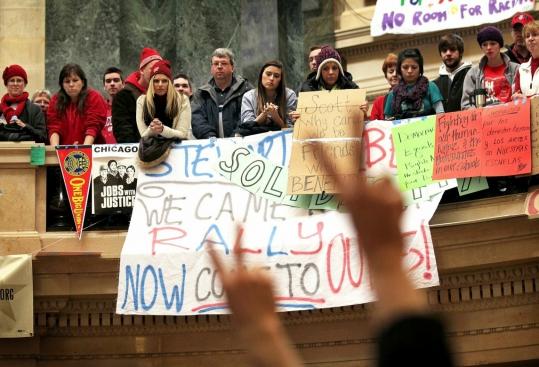 MADISON, Wis. — With booming chants of “This will not stand!’’ at least 70,000 demonstrators flooded the square around the Capitol yesterday afternoon in what local authorities called the largest protest yet in nearly two weeks of demonstrations.

The protesters rallied against a proposal by the new Republican governor, Scott Walker, that strips Wisconsin public employee unions of much of their bargaining power while imposing sizable take-home pay cuts on state workers by diverting more of their paychecks to fund health care and pension plans.

“We’ve had bargaining for 50 years, and he wants to end it in a week,’’ Al Alt, who has taught school for four decades in Waukesha, said as he paused on a bench after marching around the Capitol with other protesters.

A spokesman for the Madison police, Joel DeSpain, who provided the crowd estimate, said there had been no arrests during the rallies.

The demonstrators in Madison — joined by sympathy protests in state capitals around the country — were loud but peaceful, according to police.

But there was some unease and confusion over the fate of what has become the heart and soul of the protests: Whether the hundreds of people who have spent the night every night in the hallways, and public areas of the capitol building will be forcibly evicted beginning this afternoon.

Jodi Jensen, a senior official at the state agency that includes the Capitol police, the Department of Administration, said “there will be no more sleeping over in the Capitol’’ beginning at 4 p.m., when the building would be closed overnight for cleaning and maintenance.

From then on, she said, the building will be open during normal daily hours and closed at night. She said the decision was made because of health and safety concerns and that she wasn’t aware of any influence by Walker.

Some union officials and protesters said evictions could lead to conflict. “It’s a bit confusing,’’ Alex Hanna, co-president of the Teaching Assistants’ Association, said about the authorities’ intentions. She called the move politically motivated.

Later, Jim Palmer, the leader of a large law enforcement union, said that he has been told that the Capitol police were backing away from the plan, and he expected that protesters would still be allowed to spend the night inside.

“Now it sounds like they are going to let people stay,’’ said Palmer, executive director of the 11,000-member Wisconsin Professional Police Association. The police may only ask for people to “voluntarily comply’’ with requests to leave the building, he said. He added that his union and other labor leaders have urged their members to comply with whatever the police ask.

“We don’t want anything to happen to create a blemish on what has been a model for civil discourse,’’ he said. The Capitol police referred all inquiries to the Department of Administration.

Supporters of the Wisconsin protests gathered in capitals across the nation, from Albany to the West Coast.

One of the largest was in Columbus, Ohio, where several thousand people protested a similar labor bill under consideration there. Teachers, firefighters, and other public workers also held rallies in cities including Denver; Topeka, Kan.; Harrisburg, Pa.; and Olympia, Wash., the Associated Press reported.