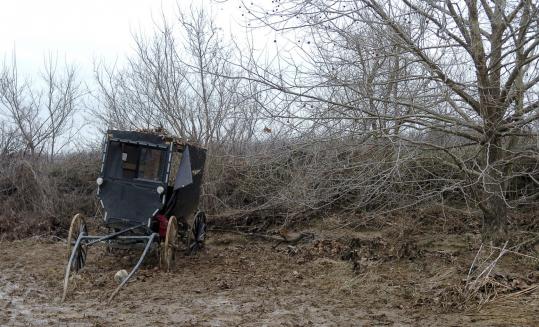 A tattered buggy that overturned in a flooded creek stood in a field near Dublin, Ky. Four children were swept to their deaths. (Associated Press/Stephen Lance Dennee)
Associated Press / February 26, 2011

MAYFIELD, Ky. — A horse-drawn buggy carrying an Amish family of nine home from using a community telephone toppled in a rain-swollen creek in rural Kentucky, killing four children who were swept away in the swift-moving water, authorities said yesterday.

The group was traveling in a downpour in the dark about 8:30 p.m. Thursday when the buggy flipped just a mile from their house. The buggy was crossing a creek that is normally a trickle but often floods during heavy rains.

The family was out during severe thunderstorms that had already dropped 2 inches of rain on the area. Two more inches were expected, prompting the National Weather Service to issue a flash-flood warning.

The warning had gone out about an hour before the buggy overturned. A Weather Service forecaster said it was possible the family, which probably shunned electricity, telephones, and modern appliances, had not heard about it.

The family had been traveling in the farming community of Dublin, heavily populated with Amish, in far western Kentucky near the Tennessee, Missouri, and Illinois lines.