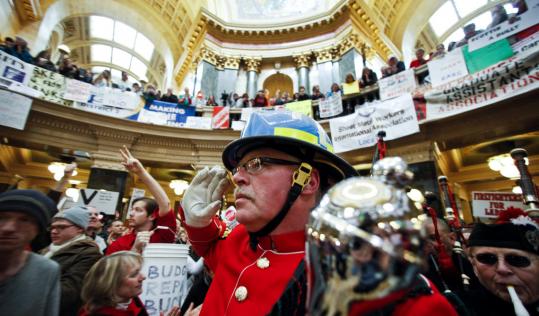 A firefighter saluted as he entered the rotunda of the state Capitol in Madison, Wis., yesterday, on the ninth day of protests over the governor’s proposal to curb state worker unions. (Andy Manis/ Associated Press)
By Ryan J. Foley Associated Press / February 24, 2011

MADISON, Wis. — On a prank call that quickly spread across the Internet, Governor Scott Walker of Wisconsin was duped into discussing his strategy to cripple public employee unions, promising never to give in and joking that he would use a baseball bat in his office to go after political opponents.

Walker believed the caller was a conservative billionaire named David Koch, but it was actually the editor of a liberal online newspaper. The two talked for at least 20 minutes — a conversation in which the governor described several potential ways to pressure Democrats to return to the State House and revealed that his supporters had considered secretly planting people in pro-union protest crowds to stir up trouble.

Walker compared his stand to that taken by President Reagan when he fired the nation’s air-traffic controllers during a labor dispute in 1981.

“That was the first crack in the Berlin Wall and led to the fall of the Soviets,’’ Walker said on the recording.

The audio was posted by the Buffalo Beast, a left-leaning website based in Buffalo, N.Y., and quickly went viral.

Editor Ian Murphy told the Associated Press he carried out the prank to show how candidly Walker would speak with Koch even though Democrats say he refuses to return their calls.

Murphy said he arranged the call Tuesday after speaking with two Walker aides, including the governor’s chief of staff. He placed the call using Skype and recorded it.

Walker spokesman Cullen Werwie confirmed that it was Walker’s voice on the call. At a news conference, Walker acknowledged being deceived but stuck to his message that the union changes were needed to balance Wisconsin’s budget.

“I’m not going to let one prank phone call be a distraction from the job we have to do,’’ Walker said. “The things I said are the things I’ve said publicly all the time.’’

On the call, the governor said he was ratcheting up the pressure on Senate Democrats to return to the Capitol a week after they left to block the legislation. He said he supported a move to require them to come to the Capitol to pick up their paychecks rather than have the money deposited directly.

He also floated an idea to lure Democratic senators back to the Capitol for negotiations and then have the Senate quickly pass the bill while they are in talks.

Walker said aides were reviewing whether the GOP could hold a vote if Democrats were not physically in the Senate chamber but elsewhere in the building.

Democrats seized on Walker’s recorded comments as evidence that the governor plans to go beyond budget cuts to crushing unions.

“This isn’t about balancing the budget. This is about a political war,’’ Representative Jon Richards of Milwaukee yelled yesterday on the floor of the state Assembly.