File a barrage of amendments in Assembly 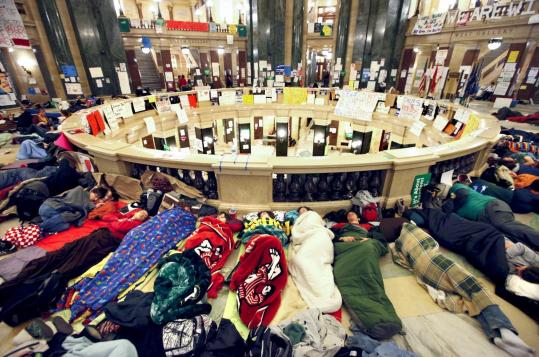 MADISON, Wis. — With their Senate colleagues still in hiding, Democrats in the Wisconsin Assembly began introducing a barrage of 100 amendments yesterday to try to stymie the Republican governor’s plan to strip unionized public employees of most of their bargaining rights.

Both houses of the GOP-controlled Legislature convened shortly before noon amid noisy protests outside the state Capitol that began more than a week ago in an epic showdown that is being watched nervously by organized labor across the country.

The Senate was unable to take up the union measure because its 14 Democrats skipped town last week, denying the chamber a quorum. But Assembly Speaker Jeff Fitzgerald pledged that his chamber would approve the bill this week, despite the blizzard of amendments.

Turning up the pressure on the Democrats, Governor Scott Walker warned that state employees could start receiving layoff notices as early as next week if the bill isn’t passed soon. The layoffs couldn’t take effect immediately — existing union contracts could forestall them for weeks or months — and Walker wouldn’t say which jobs he would go after first.

“Hopefully we don’t get to that point,’’ the governor said in a statement.

Borrowing the strategy pioneered by President Franklin D. Roosevelt, Walker planned to take his case straight to the voters last night with a fireside chat.

While Wisconsin remained the main front in the national debate over union rights, similar battles were taking shape in other states. In Indiana, House Democrats walked out of the State House yesterday, blocking a GOP-backed bill against mandatory union dues. Only three of the 40 Democratic members of the chamber were present, depriving it of a quorum.

A similar debate in Ohio drew thousands of union protesters yesterday, prompting officials there to lock the doors to the State House.

In Wisconsin, if lawmakers take no action on the union bill by the end of the week, the state will not be able to refinance debt that Walker had counted on for $165 million worth of savings under the legislation. The governor warned that not doing that would force even deeper cuts and possibly lead to 1,500 layoffs by July.

Republican leaders in both the Senate and Assembly said they have the votes to pass the bill.

Fitzgerald, the Assembly speaker, said the bill was a key part of the Republican agenda to cut government spending that won the GOP majorities in the Legislature in November.

“When you talk about a compromise, no. We’re going to make a reform,’’ he said.

Debate began on the bill in the Assembly around noon with Democrats railing against the way the Republicans handled votes when the bill first came up last Friday. Given the number of amendments Democrats were proposing, an actual vote on the measure may not happen until Wednesday or later.

“It’s going to be a long day,’’ minority leader Peter Barca said at the start of debate. “Tempers are going to flare.’’

The roar of protesters in the Capitol rotunda, many of whom were banging on drums and chanting through megaphones, could be heard while both the Senate and Assembly met.

The Wisconsin bill would force state and local public workers to contribute more toward their pensions and health care and would strip them of the right to negotiate benefits and working conditions. They would largely be limited to negotiating pay raises no greater than the inflation rate.

The proposal, designed to help Wisconsin plug a projected $3.6 billion hole in the budget, has led to eight straight days of monumental protests that grew as large as 68,000 people on Saturday.

The Senate was stymied for a second time in its attempts to take up the bill after none of the 14 Democrats who skipped town on Thursday showed up. Under Senate rules, 20 lawmakers must be present to take up a budget bill. There are only 19 Republicans.

Unable to act on Walker’s proposal, the remaining Republicans instead took up some noncontroversial measures, voting to extend tax breaks to dairy farmers and unanimously commending the on winning the Super Bowl. The Senate does not need a quorum to deal with non-budget matters.

Unlike last Thursday, when the Senate galleries were filled with protesters who disrupted action by shouting, only about a dozen people showed up under heavier security to watch the action yesterday.