Tens of thousands protest in Wisconsin

Those for, against plan to weaken unions face off 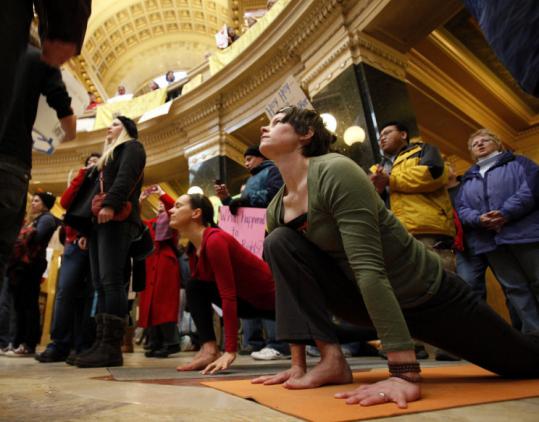 MADISON, Wis. — A state Capitol thrown into political chaos swelled with nearly 70,000 demonstrators yesterday, as supporters of Republican efforts to weaken the union rights of state workers challenged prolabor protesters face-to-face for the first time and GOP leaders insisted again that there was no room for compromise.

A few dozen police officers stood between supporters of Governor Scott Walker, a Republican, on the muddy east lawn of the Capitol and the much larger group of prolabor demonstrators who surrounded them. The protest was peaceful as both sides exchanged chants of “Pass the bill! Pass the bill!’’ and “Kill the bill! Kill the bill!’’

“Go home!’’ union supporters yelled at Scott Lemke, a 46-year-old machine parts salesman from Cedarburg who wore a hard hat and carried a sign that said “If you don’t like it, quit’’ on one side, and “If you don’t like that, try you’re fired’’ on the other.

The governor, elected in November’s GOP wave that also gave control of the state Assembly and Senate to Republicans, set off the protests last week by pushing ahead with a measure that would require government workers to contribute more to their health care and pension costs and would largely eliminate their collective bargaining rights.

He says the concessions are needed to deal with the state’s projected $3.6 billion budget shortfall and to avoid layoffs of government workers.

“We did have an election and Scott Walker won,’’ said Deborah Arndt, 53, of Sheboygan Falls. “I think our governor will stand strong. I have faith in him.’’

At a rally organized by Tea Party , the movement’s largest umbrella group, and Americans for Prosperity, supporters of Walker carried signs with a fresh set of messages: “Your Gravy Train Is Over . . . Welcome to the Recession,’’ and “Sorry we’re late, Scott. We work for a living.’’

“We pay the bills!’’ Tea Party favorite Herman Cain yelled to cheers from the pro-Walker crowd. “This is why you elected Scott Walker and he’s doing his job. . . . Wisconsin is broke. My question for the other side is, ‘What part of broke don’t you understand?’ ’’

Nearby, nearly two dozen cabs blocked a major intersection near the Capitol. The driver of the lead cab leaned out of the window and played a trumpet, while others attempted to honk their car horns in synch with a chant from prolabor protesters: “This is what democracy looks like.’’

“One of the reasons the company decided to support the protesters is because the members of this company started off striking their employer for better wages and that employer . . . refused to allow them to bargain collectively,’’ said John McNamara, the marketing director of Union Cab.

Senate majority leader Scott Fitzgerald reaffirmed yesterday that Republicans have not been swayed by the prolabor protesters who since Tuesday have filled the Capitol with chanting, drumbeats, and anti-Walker slogans.

“The bill is not negotiable,’’ Fitzgerald said inside a heavily guarded Senate parlor at the Capitol.

Fitzgerald said Republicans have the votes needed to pass the so-called budget repair bill just as soon as 14 Senate Democrats who fled the state on Thursday and remain in hiding return to the State House. The missing Democrats have threatened to stay away for weeks and remain more resolved than ever to stay away “as long as it takes’’ until Walker agrees to negotiate, Senator Jon Erpenbach, a Democrat, said yesterday.

“I don’t think he’s really thought it through, to be honest,’’ Erpenbach said.

Democrats offered again yesterday to agree to the parts of Walker’s proposal that would double workers’ health insurance contributions and require them to contribute 5.8 percent of their salary to their pensions, so long as workers retained their rights to negotiate with the state as a union.

Fitzgerald said he was unimpressed, given that the offer was something the GOP has rejected for months. The restrictions on collective bargaining rights are needed so local governments and the state will have the flexibility needed to balance budgets after cuts Walker plans to announce next month, he said.

Walker, who was spending time with his family yesterday and wasn’t expected to make an appearance at the Tea Party-organized rally, also rejected the Democrats’ offer. His spokesman, Cullen Werwie, said the fastest way to end the stalemate was for Democrats to return and “do their jobs.’’

Senator Tim Cullen, a Democrat from Janesville, refused to say where he was yesterday but said he didn’t expect the Senate to meet again until Tuesday. Cullen said he was watching yesterday’s rallies on television with some friends.