Signs of union unrest spread from Wisconsin to other states 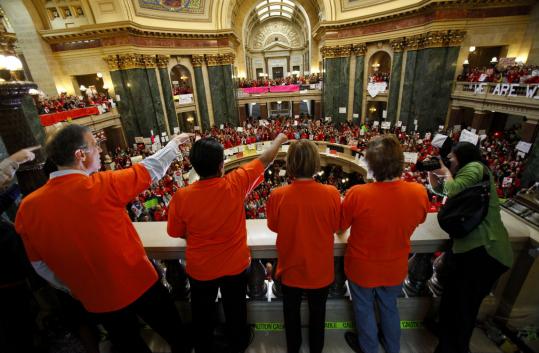 The unrest in Wisconsin this week over Governor Scott Walker’s plan to cut the bargaining rights and benefits of public workers is spreading to other states.

Already, protests erupted in Ohio this week, where another newly elected Republican governor, John Kasich, has been trying to take away collective bargaining rights from unions.

In Tennessee, a law that would abolish collective bargaining rights for teachers passed a state Senate committee this week despite teachers’ loud objections. Indiana is weighing several proposals to weaken unions. Public workers in Pennsylvania, who are not facing an attack on their bargaining rights, said yesterday that they nonetheless planned to wear red next week to show solidarity with the workers in Wisconsin.

In many states, Republicans who came to power in the November elections, often by defeating union-backed Democrats, are taking aim not only at union wages, but at union powers as they face continuing budget gaps in the years ahead.

The images from Wisconsin — with its volatile protests, the shutdown of some public services, and an exile by Democratic lawmakers, who fled the state to block a vote — evoked the Middle East more than the Midwest.

The parallels raise the question: Is Wisconsin the Tunisia of collective bargaining rights?

Walker, in an interview, said he hoped that by what he called “pushing the envelope’’ and setting an aggressive example, Wisconsin might inspire more states to curb the power of unions.

“In that regard, I hope I’m inspiration just as much as others are an inspiration to me,’’ he said.

FreedomWorks, a Washington group that has helped cultivate the Tea Party movement, said it was trying to use its lists of activists to turn out supporters of a variety of bills aimed at cutting the power of unions — not just in Wisconsin, but in Tennessee, Indiana, and Ohio as well.

And officials seeking to curtail union powers in some other states said that by focusing public attention on the powers of public sector unions, the tense standoff in Wisconsin could give them momentum.

“We think that what’s going on in Wisconsin actually helps us here in Ohio,’’ said Rob Nichols, a spokesman for Kasich of Ohio, who supports a bill to limit collective bargaining rights there.

But Wisconsin is proving to be a catalyst for Democrats and the labor movement as well, who are taking heart from the way thousands of workers rallied there.

With the falling popularity of unions in recent years, some union leaders see the attempt to take away bargaining powers as an overreaching that could have the effect of shifting the question from whether public sector workers are overpaid to whether they should have the right to negotiate contracts at all.

To that end, unions and Democrats are preparing their own post-Wisconsin campaigns in a number of states against what President Obama called “an assault on unions’’ in a television interview this week.

“Workers’ rights — including the fundamental right to organize and bargain for better pay, benefits, and working conditions — are under attack in states from Maine to Ohio, from Wisconsin to Florida,’’ said Gerald W. McEntee, the president of the American Federation of State, County, and Municipal Employees, the main union of state employees.

Walker’s plan would limit collective bargaining for most state and local government employees to wages, instead of issues like benefits and work conditions.