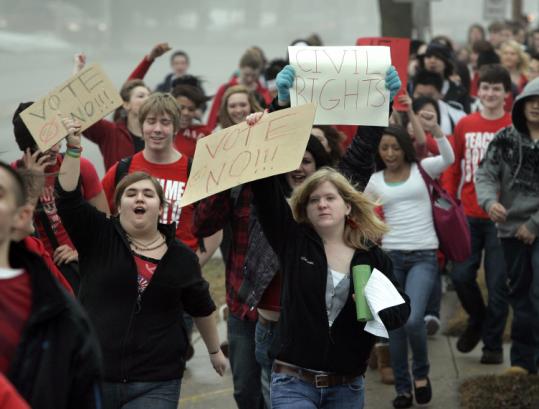 Students from Appleton West High School in Wisconsin turned out to support their teachers yesterday at the Capitol to stop passage of a bill that would end collective bargaining. (Sharon Cekada/The Post-Crescent via Associated Press)
By Scott Bauer Associated Press / February 18, 2011

MADISON, Wis. — A group of Democratic lawmakers blocked passage of a sweeping anti-union bill yesterday, refusing to show up for a vote and then abruptly leaving the state in an effort to force Republicans to the negotiating table.

As ever-growing throngs of protesters filled the Capitol for a third day, the 14 Democrats disappeared around noon, just as the Senate was about to begin debating the measure, which would end a half-century of collective bargaining rights for most public employees.

Hours later, one member said that they had left Wisconsin.

“The plan is to try and slow this down because it’s an extreme piece of legislation that’s tearing this state apart,’’ Senator Jon Erpenbach said by phone. He refused to say where he was.

Democrats hoped Governor Scott Walker, a Republican, and GOP lawmakers would consider revisions to the bill.

Walker, who took office last month, urged the group to return and called the boycott a stunt.

“It’s more about theatrics than anything else,’’ he said. The governor predicted the group would come back in a day or two, after realizing “they’re elected to do a job.’’

Walker said Democrats could still offer amendments to change the bill, but he vowed not to concede on his plan to end most collective bargaining rights.

With 19 seats, Republicans hold a majority in the 33-member Senate, but they are one vote short of the number needed to conduct business. So the GOP needs at least one Democrat to be present before any voting can take place. Once the measure is brought to the floor, it needs 17 votes to pass.

Other lawmakers who fled sent messages over Twitter and issued written statements but did not disclose their location.

Erpenbach said the group had been in Rockford, Ill., but they dispersed by late afternoon and were all still outside Wisconsin.

In response to a question of where she was, Senator Lena Taylor sent a tweet saying she was “doing the people’s business. Power to the PEOPLE.’’

As Republicans tried to begin Senate business yesterday, observers in the gallery screamed “Freedom! Democracy! Unions!’’ Opponents cheered when a legislative leader announced there were not enough senators present to proceed.

The sergeant-at-arms immediately began looking for the missing lawmakers. If he cannot find them, he is authorized to seek help, including potentially contacting police.

Senate rules and the state constitution say absent members can be compelled to appear, but it does not say how.

“Today, they checked out, and I’m not sure where they’re at,’’ said Scott Fitzgerald, the Senate majority leader. “This is the ultimate shutdown, what we’re seeing today.’’

Elsewhere, some Democrats applauded the developments in Wisconsin as a long-awaited sign that their party was fighting back against the Republican wave created by November’s midterm election.