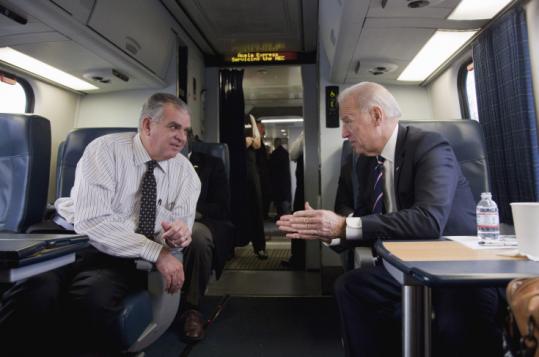 PHILADELPHIA — The Obama administration wants to invest $53 billion in high-speed and intercity rail service in the next six years, expanding a signature transportation initiative it already has targeted with $10.5 billion.

The plan to spend billions more on a vast high-speed-rail network was cast by the administration as vital to keeping the United States competitive with world markets that already use the technology.

“Public infrastructure investment raises private-sector productivity,’’ Vice President Joe Biden said yesterday, continuing a theme struck by the president in his State of the Union speech last month. “They literally are the veins and arteries of commerce.’’

Biden and Transportation Secretary Ray LaHood unveiled the plan in Philadelphia’s majestic 30th Street Station. Obama’s budget for fiscal 2012, which will be sent to Congress next week, includes $8 billion for the plan.

There is bipartisan support for construction of high-speed-rail service, but sharp disagreement on whether it should be funded with tax dollars or through private investment.

“This is like giving Bernie Madoff another chance at handling your investment portfolio,’’ Mica said in a statement. “With the first $10.5 billion in administration rail grants, we found that . . . what the administration touted as high-speed rail ended up as embarrassing, snail-speed trains to nowhere.’’

Although Biden spoke in more modest terms, high-speed advocates envision a network of 17,000 miles of rail capable of handling trains traveling at 220 miles per hour. The US High Speed Rail Association has estimated the price tag at $600 billion over the next 20 years, a cost that critics say the nation cannot afford.

The White House push for rail construction was launched with $8 billion in stimulus act funding. Later LaHood added $2.5 billion to boost the effort in 23 states. California has received the bulk of the awards, about $3 billion total.

The proposal to allocate $8 billion in the next fiscal year spreads the money across three types of train travel, construction of high-speed corridors, creation of regional systems for trains capable of speeds from 90 to 125 miles per hour, and provisions for slower feeder lines into the high-speed network.

Critics have argued that a car-loving nation will not be won over to train travel in sufficient numbers to justify the federal investment. Two recently elected Republican governors, Scott Walker of Wisconsin and John Kasich of Ohio, plan to forgo $1.3 billion in federal rail funding and focus instead on highway improvement.

In announcing the plan, Biden twice mentioned that he took more than 7,900 round trips on Amtrak trains between Washington and his home in Delaware during his years in the US Senate. He said transforming rail service to match the high-speed lines proliferating in China and Europe is essential to continued prosperity.

He said the United States “taught the world’’ about transportation in the 19th and 20th centuries.

Biden said building rail lines would relieve highway congestion on the East and West coasts, where most Americans live, and put people back to work.

“Right now, nobody makes these [trains] in America,’’ he said. “Our long-term commitment is going to give birth to a new industry.’’

“Investing in our country’s transportation infrastructure is vital for economic growth, competitiveness, and quality of life,’’ said William Millar, president of the association.

Last fall Amtrak announced a 30-year plan to invest $117 billion in developing high-speed rail in the Northeast corridor. Amtrak president Joseph Boardman has said the system would reduce the travel time between Washington and New York City from 162 minutes to 96 minutes and the travel time between New York and Boston from 215 minutes to 84 minutes.

The White House also said yesterday the president’s budget proposal would give states a chance to eventually raise more unemployment insurance taxes from businesses. The plan would raise the income level that is subject to state jobless insurance taxes from $7,000 to $15,000 in 2014.

The administration said the enactment would be delayed for two years to prevent adding a burden to businesses as the economy recovers.

In the short term, the proposal would impose a moratorium in 2011 and 2012 on state tax increases and on state interest payments on the money borrowed from the federal government.

Rising unemployment has placed such a burden on states that 30 of them owe the federal government $42 billion borrowed to meet their unemployment insurance obligations.