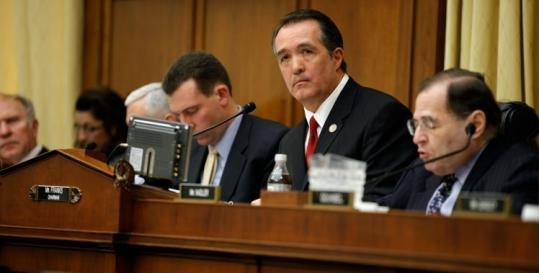 WASHINGTON — Republicans, who came to power in the US House on a Tea Party platform of job creation and budget cuts, yesterday clashed sharply with Democrats over a GOP effort to push through a host of new antiabortion measures, including a proposal that would eliminate tax deductions for private insurance plans that cover abortions.

The move is being watched closely as a test of how far Republicans are willing to try to extend influence beyond their economic agenda and push a social issue that has inflamed politics and divided Americans for decades.

At a packed hearing before the House Judiciary’s subcommittee on the Constitution, the Republican chairman, Trent Franks of Arizona, said that a new debate on federal funding of abortions should begin due to advances in technology that better reveal the beginnings of human life. “We’re beginning to ask the real question — does abortion take the life of a child?’’ If the answer is yes, Franks said, then abortion could be called “the greatest human genocide in history.’’

But Representative Jerrold Nadler, a New York Democrat, decried efforts to further restrict federal funding of abortion. “This legislation represents an entirely new front in the war against women,’’ he said. “It is about government interfering in the lives of women.’’

The heated atmosphere at the hearing underscored the potential the issue holds to dominate the attention of Congress. About 100 spectators and members of the press packed the room, accompanied by a heavy police presence. Ten protesters stood up and pulled red gags around their mouths before being escorted away.

“It’s a great thing for the majority of Americans who are prolife to finally have champions in Congress,’’ said Charmaine Yoest, president and chief executive of the antiabortion group Americans United for Life. “When we had a proabortion majority in both the House and Senate and in the White House, we had debate shut down, and that did not represent where the American people are on this issue.’’

With the Senate and White House in the hands of Democrats, chances are slim that major changes to abortion laws will be enacted into law, said Richard Fallon, a constitutional law professor at Harvard Law School. What abortion opponents may be able to do, however, “is push the envelope a little bit at a time and see how far they can get the courts to go.’’

Charles Franklin, a political scientist at the University of Wisconsin-Madison, said the Republican focus on abortion could present a political danger for the party, which scored big gains in the midterm elections due partly to independent voters who were attracted to the GOP’s platform of economic issues. Franklin said Republicans must take care that bottled-up demand among social conservatives for more restrictive abortion laws does not come to define the party.

“It’s the kind of problem that can mushroom whenever you push legislation that does not command the majority support of the public,’’ said Franklin.

Democrats are pushing their own agenda under the umbrella of reproductive politics, including the argument that “preventative care’’ language in last year’s health reform act should require insurance companies to cover contraceptives.

Yesterday’s hearing concerned a GOP bill seeking to further limit spending federal money on abortions, except in cases of rape or incest or when a woman’s life is threatened. The prohibition, known as the Hyde Amendment, dates back to 1976, and mostly affects lower-income women on Medicaid. Polling has found that the public generally supports the prohibition, and after more than three decades, many abortion-rights advocates have come to tolerate the ban.

Republicans said yesterday they want to expand greatly the reach of the Hyde Amendment to deny federal tax deductions to millions of people who buy private insurance plans that cover abortion services, even if those services are never used.

Under the GOP bill, self-employed people who buy their own health insurance would no longer be able to deduct the cost of their policy from their income taxes if it covers abortion.

In addition, individuals with high out-of-pocket medical costs would lose allowable tax deductions if they have medical plans that cover abortion, and people who set aside pretax income in personal health savings accounts would have to pay taxes on any money from the fund used to pay for an abortion. The bill would also eliminate business tax credits designed to help companies provide medical benefits to their employees, if those benefits include abortion coverage.

“This bill is a total reconception of the definition of public funding,’’ said Donna Crane, policy director for NARAL Pro-Choice America, which opposes the bill. She predicted the tax penalty would compel many insurers to drop abortion coverage.

An early version of the bill, filed by US Representative Chris Smith, a New Jersey Republican, drew heated criticism for what opponents saw as an attempt to redefine the rape exemptions in the Hyde Amendment to include only “forcible rape.’’ Opponents complained the new language left it unclear whether the exemption would apply to statutory rape, or cases in which a woman is drugged. Republicans dropped the “forcible rape’’ language, but they are not backing down from their antiabortion agenda.

House Speaker John Boehner, Republican of Ohio, has called the abortion bill “one of our highest legislative priorities.’’ The Republican “Pledge to America,’’ a document issued by the GOP before the last election, promised that Republicans would strengthen the restrictions on federal money going toward abortions.

Another GOP House bill would severely restrict the ability of private insurers to offer medical plans that cover abortion services in the insurance exchanges being established by 2014 by President Obama’s health care law. When the health exchanges are established, private money to pay for abortion coverage must be kept separate from government subsidies that make the insurance more affordable. Opponents have criticized the compromise as a meaningless accounting trick.

▸ Makes the Hyde Amendment permanent and applies it across all government programs. The amendment, which has been renewed annually, prohibits federal funding for abortion, except in cases of rape or incest or to save the life of the mother.

▸ Prevents individual taxpayers from claiming a tax deduction for their health premium if their private plan covers abortions.

▸ Reinstates a ban on abortion services in any health care facility run by the District of Columbia.