In sliver of space, telescope finds bounty of intrigue 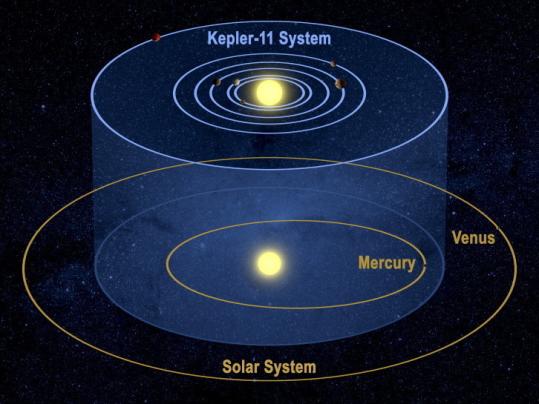 The K-11 system contains a surprisingly large clutch of planets in a relatively small area, and its planets line up as if on a disc.
By Marc Kaufman Washington Post / February 3, 2011

WASHINGTON — New discoveries from NASA’s Kepler space telescope reveal a large and surprising menagerie of planets deep in space, with some almost as small as Earth and others in the “habitable zones’’ of their solar systems where scientists think life could exist.

With about 1,200 candidate planets now catalogued, Kepler has also identified a solar system with at least six small planets orbiting their sun — all lined up on a disc-like plane similar to our own, according to results released yesterday.

The planets — called exoplanets because they are outside the Earth’s solar system — are believed to be gaseous rather than rocky and so unable to support life, but the discovery of a system with so many planets and all orbiting in a manner similar to planets in our system has created great excitement.

“This is a remarkable system and a very exciting sign of what else is to come,’’ said Jonathan Fortney, a member of the Kepler science team from the University of California at Santa Cruz.

“Given the information Kepler is sending back, we’re not only able to identify the planets, but we can tell a lot about how big they are, how close they are to their suns, and to some extent what they’re made of,’’ he said.

The results released at a NASA press conference and the journal Nature report on a little more than a quarter of the information collected so far by Kepler, launched almost two years ago.

The unprecedented job of the space telescope is to observe a small section of deep space to determine how many Earth-sized planets exist there, how many suns like our own have planets, and how many of those planets might be in habitable zones. The ultimate goal is to assess whether some planets can, or even do, support life.

Because of the technique used by Kepler to find the exoplanets, those identified so far are usually closer to their suns than Mercury is to our sun, with orbits of a few months to a few days. As Kepler collects information over a longer time, planets further from their suns will be identified and those are the ones expected to be rocky, watery, and potentially more hospitable to life.

Nonetheless, the early Kepler results have astronomers buzzing. The six-planet solar system, called K-11, not only contains that surprisingly large clutch of planets in a relatively small area, but the planets are lined up as if on a flat disc — one that’s even flatter than our own solar system. Many other solar systems identified so far have planets with “eccentric’’ orbits, moving around their suns at sharp angles to other planets in the system, a dynamic that reduces the chances that any of the planets could support life.

“We’ve come to expect the unexpected,’’ said Sara Seager, an MIT exoplanet specialist also on the Kepler science team. “This new system is one of the most interesting ever discovered because of what it says is possible.’’

The K-11 solar system is some 2,000 light-years away, and so will probably never be visited or definitively understood. That will be true of all the Kepler-discovered planets because the observatory is looking so far into space.

So it is up to astronomers and planet hunters at Earth-based observatories to use their telescopes and spectrometers to discover and describe exoplanets much closer to our solar system. So far these scientists have discovered more than 500 planets distinct from the 1,200 candidates identified by Kepler.

One of those planets, called Gliese G, was identified last year as existing within a habitable zone in relation to its relatively small sun about 20 light years away. The discovery remains to be confirmed.

Last month, NASA announced Kepler’s discovery of the first confirmed “rocky’’ planet, about 1.4 times the size of Earth. But that planet, some 560 light-years away, is not habitable since it’s close enough to its sun to orbit every 20 hours and probably records temperatures as high as 2,500 degrees F.

The Kepler space telescope detects planets that pass in front of their stars and thereby cause a tiny periodic dip in the brightness of the star. The amount of reduced brightness lets scientists know how large the planet while the time between transits reveals the speed of its orbit.

Because of the great distances involved, the exoplanets will most likely always remain known through mathematics and statistics rather than as the actual objects they are. That leaves specialists like Seager to wonder whether the public will accept them as fully real.