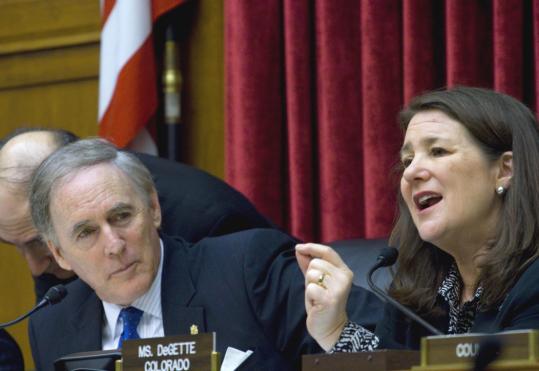 The hearing witness, Cass Sunstein, Obama administration chief regulatory official, insisted that rules are designed to protect the public and the economy and are issued only after balancing benefits against the costs.

“Job creation is in the first sentence’’ of President Obama’s recent executive order to review all government regulations, Sunstein said.

The session by the Energy and Commerce investigative subcommittee underscored the differences between the two parties, even though Obama’s executive order ordered agencies to use the least burdensome tools when issuing regulations and to eliminate existing ones that are counterproductive.

GOP lawmakers challenged Sunstein on a range of rules, making clear that they have broad concerns about steps the administration is taking.

Representative Fred Upton, Republican of Michigan and chair of the Energy and Commerce Committee, was worried about an Environmental Protection Agency plan to regulate emissions from large boilers that by court order is to be issued soon. Representative Michael Burgess, Republican of Texas, objected to a new federal agency overseeing insurers created with last year’s health care overhaul.

Republican representatives Steve Scalise of Louisiana asked about Obama’s moratorium on offshore oil and gas production in the Gulf of Mexico after last year’s oil disaster and David McKinley of West Virginia complained about the EPA revoking a permit allowing a mine in the state to operate.

“Sometimes regulations aren’t worth the cost, which is just plain dumb,’’ said Upton.

Representative Cliff Stearns, Republican of Florida and head of the investigations panel, also went on the offensive, accusing the Obama administration of a rush to regulate and basing job-killing decisions on political correctness.

At one point, Representative Cory Gardner, Republican of Colorado, asked Sunstein to promise that with the economy still troubled, “you will use your power to make sure the administration doesn’t put a stamp of approval on any regulation that costs American jobs.’’

Gardner tried limiting Sunstein to a yes or no answer, but the administration official responded, “A yes answer would be preposterous. If there’s a regulation that’s saving 10,000 lives and costing one job, it’s worth it.’’

Democrats argued that in many instances such as the 2008 financial crisis and the Deepwater Horizon oil spill, it was the lack of effective regulation that led to problems, not too much federal control.

“Regulations per se are not the problem,’’ said Representative Diana DeGette of Colorado, the investigations subcommittee’s top Democrat. “The mantra that regulations are inherently bad and kill jobs is wrong and dangerous.’’

Representative Henry Waxman of California, leading Democrat on the Energy committee, said environmental rules even protect national security by cutting US dependence on foreign oil and added, “Let’s prune unnecessary regulations where we find them. But let’s also not hesitate to regulate where needed to protect our economy and children’s future.’’

The two sides’ differing views have led many to believe it will be hard for them to agree on rules that should be rolled back.

“A lot of what each party may want to go after is supported by some set of the public,’’ said Peter Van Doren, editor of Regulation magazine, published by the Cato Institute, which favors limiting government’s reach. He predicted numerous partisan clashes, “and in 2012 we’ll have the election and see what happens.’’

Since Obama controls federal agencies and Democrats run the Senate, it will be tough for Republicans to force the administration to drop regulations the president likes. Either way, participants agree, the duel will have a distinct political flavor, with the GOP pushing for business interests’ goals and Obama protecting Democratic constituencies such as labor and environmental groups while also showing concern about stifling jobs.

“Clearly, this White House is starting to think about 2012,’’ when Obama faces reelection, said Gary Bass, executive director of OMB Watch, which monitors the regulatory process.

In one sign of the administration’s changed sensibilities, it bowed to industry pressure Tuesday and delayed a proposal to require companies to keep separate records on workplace musculoskeletal injuries.