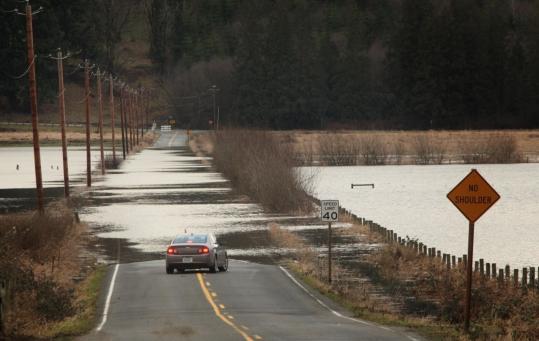 PORTLAND, Ore. — A Pacific storm that swept through the Northwest brought heavy rain to Oregon and Washington, causing multiple landslides that shut down roads across the region.

Heavy rain and runoff from melting snow swelled a river across a road near Mount Hood in Oregon, washing it out and forcing residents to flee their neighborhoods on foot.

The Oregonian reported that fire officials sent teams on foot and all-terrain vehicles yesterday to reach people in 30 to 40 homes that were cut off when the river washed out a road Sunday near the town of Zigzag.

The National Weather Service said as much as 6 to 10 inches of rain fell in 24 hours in the Sandy River drainage, while an additional 2 inches of snow melted on the flanks of Mount Hood.

KOIN-TV reported that a section of a Portland road was partly under water, while a landslide closed the westbound lanes of Highway 26 in the mountains west of Hillsboro.

Forecasters said flooding from the weekend storm continued yesterday because waterways were already rising from snowmelt due to recent warmer temperatures.

A winter storm was also headed toward the East Coast. A mix of snow, rain, and ice was expected by this morning.

The low-pressure system began over the Dakotas before moving into the Upper Midwest, producing widespread snow from the Dakotas through Michigan and the Ohio Valley.