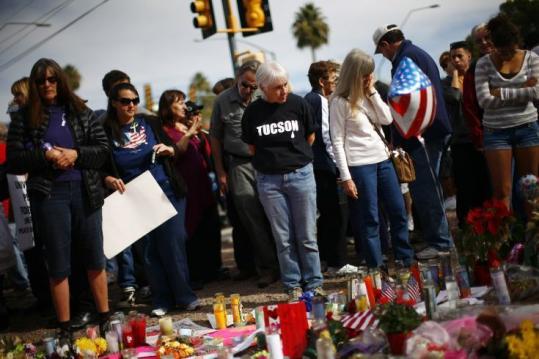 Well-wishers left tributes to Representative Gabrielle Giffords yesterday outside her office in Tucson. Doctors said that they might soon know if the injured legislator is able to speak. (Eric Thayer/Reuters)
By Amanda Lee Myers Associated Press / January 17, 2011

TUCSON — In yet another sign of significant recovery during a remarkable week, the gravely wounded Representative Gabrielle Giffords was upgraded from critical to serious condition yesterday after a procedure to remove her from a ventilator was successful.

Doctors have been very positive in describing her progress since she was shot in the head at close range on Jan. 8.

Giffords responded from the moment she arrived at the emergency room, at first just squeezing a doctor’s hand. Then she raised two fingers. She opened her unbandaged eye shortly after President Obama’s bedside visit Wednesday. Then, more milestones — which doctors said were all indicative of higher cognitive function — were achieved, all with her husband, astronaut Mark Kelly, at her side.

Kelly asked her to give him a thumbs-up if she could hear him. She did more than that. She slowly raised her left arm. By the end of the week, she had moved her legs and arms.

At the hospital, more than 100 people were gathered amid the sea of get-well balloons and cards when the University of Arizona put out a statement on her condition.

Doctors decided to upgrade her condition because the tracheotomy done a day earlier was uneventful, hospital spokeswoman Katie Riley said. A feeding tube was also put in Saturday, and doctors speculated that they might soon know if she can speak.

Few people survive a bullet to the brain — just 10 percent — and some who do end up in a vegetative state. It is even more rare for people with gunshot wounds to the head to regain all of their abilities, and doctors have cautioned that the full extent of Giffords’s recovery remains uncertain.

Giffords and 18 others were shot when a gunman opened fire at a meet-and-greet she was hosting outside a supermarket in her own hometown. Six people died.

Meanwhile, a week after the Tucson supermarket massacre, more details emerged about a shooting victim who police said became distraught and was arrested during a televised town hall meeting.

James Eric Fuller, 63, a self-described liberal and military veteran, started ranting at the end of the program Saturday. He took a picture of Tucson Tea Party’s cofounder, Trent Humphries, and yelled “you’re dead’’ before calling others in the church a bunch of “whores,’’ authorities said.

Deputies called a doctor and decided he should be taken to a hospital for a mental evaluation, said a Pima County sheriff’s spokesman, Jason Ogan.

No one answered the door yesterday at Fuller’s home.

In media interviews and on the Web, Fuller, a former limousine driver and Census worker, has said he worked hard to get Giffords reelected in her conservative-leaning district. He was shot in the knee and back and drove himself to the hospital, where he spent two days.

Humphries, the man Fuller is accused of threatening, said he was worried about the threat, and the dozens of other angry e-mails he has received.