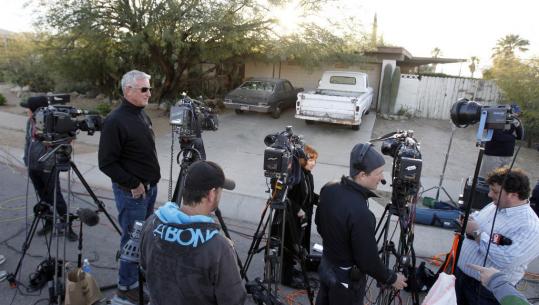 TUCSON — Investigators revealed more disturbing details yesterday about the events leading up to the assassination attempt against Representative Gabrielle Giffords, including a menacing handwritten note in the suspect’s home with the words “Die, bitch.’’

And on the day of the shooting, a mumbling Jared Loughner ran into the desert near his home after his father asked him why he was removing a black bag from the trunk of a family car, sheriff’s officials said.

Loughner resurfaced later Saturday when authorities say he showed up at a grocery store in a taxi and carried out the rampage that injured 14 people and killed six, including a federal judge and a 9-year-old girl.

Investigators provided the new details and said they’re searching for the bag. They suspect it could contain clues into Loughner’s motives.

Authorities previously said they found handwritten notes in Loughner’s safe that said “I planned ahead,’’ “My assassination’’ and the name “Giffords.’’

All the writings were in an envelope or on a form letter Giffords’s office sent him in 2007 after he attended one of her political events, Nanos said.

Loughner’s parents, silent and holed up in their home since the shooting spree, apologized yesterday.

“There are no words that can possibly express how we feel,’’ Randy and Amy Loughner wrote in a statement handed to reporters waiting outside their house. “We wish that there were, so we could make you feel better. We don’t understand why this happened.

“We care very deeply about the victims and their families. We are so very sorry for their loss.’’

The apparent target of the attack, Giffords, 40, was able to breathe on her own yesterday at an intensive care unit here, another hopeful sign of her progress, doctors said.

Meanwhile, several hundred mourners filled a Tucson church for a public Mass to remember the slain and pray for the injured.

As people filed in, nine young girls sang “Amazing Grace.’’ The youngest victim of the attack, 9-year-old Christina Taylor Green, was a member of that choir.

Yvonne Ignacio, 53, went to the Mass after learning about the shooting while she was listening to conservative talk radio Saturday.

“I am dismayed that it’s become political. That’s disrespectful to the victims and that’s why we’re here,’’ said Ignacio, who is a member of the Tea Party movement.

Today, President Obama will visit Arizona and give a speech honoring those killed.

Also yesterday, Arizona legislators quickly approved emergency legislation to head off picketing by a Topeka, Kan., church near the funeral service for Green.

The Westboro Baptist Church said Monday that it plans to picket tomorrow’s funeral because “God sent the shooter to deal with idolatrous America.’’

The fundamentalist church has picketed many military funerals to draw attention to its view that the deaths are God’s punishment for the nation’s tolerance of homosexuality.

Meanwhile, the new details about the hours before the shooting and interviews with those who knew Loughner or his family painted a picture of a young loner who tried to fit in.

He went through the motions as many young men do nowadays: living at home with his parents, working low-wage jobs at big brand stores, and volunteering time doing things he liked.

None of it worked. His relationship with his parents was strained. He clashed with co-workers and police. And he couldn’t follow the rules at an animal shelter where he spent some time.

The parents of a close friend recalled how Loughner’s parents showed up at their doorstep in 2008 looking for their son, who had left home about a week before and broken off contact.

While the friend, Zach Osler, didn’t want to talk, his parents, Roxanne and George Osler IV, did.

With the Loughners at their house, Zach Osler told them the name of the local hotel where their only child was staying, Zach’s father said. Jared moved back in, he said.

The boys listened to the heavy metal band Slipknot and progressive rockers The Mars Volta, studied the form of meditative movement called tai chi, and watched and discussed movies.

Loughner was arrested in October 2008 on a vandalism charge near Tucson after admitting that he vandalized a road sign with a magic marker, scrawling the letters “C’’ and “X’’ in a reference to what he said was Christianity.

The case was ultimately dismissed after he paid a $500 fine and completed a diversion program.