Sisters out of prison, next face transplant 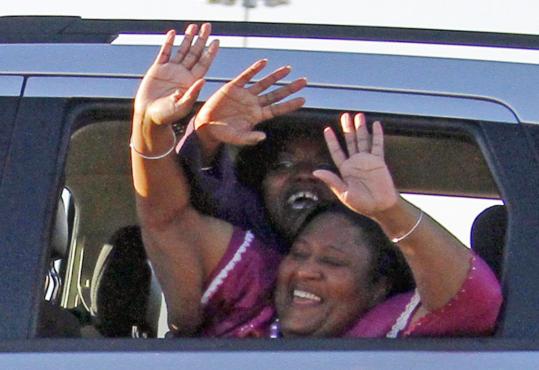 PEARL, Miss. — Sisters Jamie and Gladys Scott left prison yesterday for the first time in 16 years, yelling, “We’re free!’’ and “God bless y’all!’’ as they pulled away in a silver sport utility vehicle. That freedom, though, comes with an unusual condition: Gladys has one year to donate a kidney to her ailing sister.

Now, with their life sentences for armed robbery suspended, their futures are uncertain. Their children have grown up. Their family moved to Florida. They are using technology such as cellphones for the first time. And questions abound: Who will pay for their medical care? Would Gladys’s conditional release hold up in court? And perhaps the biggest mystery ahead: Are they a compatible match for the transplant?

An afternoon news conference for the sisters in Jackson was attended by dozens of supporters. Many cheered. Some sang. A few cried.

The sisters — Jamie wearing pink, Gladys wearing purple — sat smiling at a table, their hands clasped before them as their attorney, Chokwe Lumumba, thanked a list of advocacy groups who worked for their release.

Jamie Scott said she looked forward to moving on her with her life and doubted at times she’d ever be free, but she leaned on her faith.

She said the reality of the situation will probably sink in when she sees her grown children, who were young when they went to prison.

The sisters are moving to Pensacola to live with their mother. They hope to qualify for government-funded Medicaid insurance to pay for the transplant and for 38-year-old Jamie Scott’s dialysis, which officials said had cost Mississippi about $200,000 a year. A few doctors have expressed interest in performing the transplant, but there are no firm plans.

Governor Haley Barbour of Mississippi agreed to release Jamie Scott because of her medical condition, but 36-year-old Gladys Scott must donate the kidney within one year as a condition of her release. The women weren’t eligible for parole until 2014. The supporters who fought for the sisters’ release insisted that Jamie Scott may not live that long without a new kidney.

Barbour has not directly answered questions from the Associated Press about whether he would send Gladys Scott back to prison if she changes her mind or if she is not a suitable donor.

However, the sisters’ attorney and Benjamin Todd Jealous, president and chief executive of the NAACP, have said the governor’s office assured them the transplant condition of release would not be enforced. And the American Society of Transplantation has called on Barbour to base his decision to release Gladys Scott on legal merits — not her willingness to donate an organ.

“The decision to donate an organ should be a truly selfless act, free from coercion and not conditioned on financial or any other material gain,’’ the American Society of Transplantation president, Dr. Maryl R. Johnson, said yesterday in a statement.

The sisters’ supporters said Gladys Scott wants nothing more than to save her sister’s life.

“I wanted to give my sister a chance to walk out that prison door,’’ Gladys Scott said of the decision to offer her kidney. “I’m praying to God that I’m a match.’’

But several experts said the transplant condition could be interpreted as trading an organ for freedom, which could violate federal laws against selling organs.

The Scotts were convicted in 1994 of an armed robbery in central Mississippi on Christmas Eve the year before. The robbery didn’t net much; amounts cited have ranged from $11 to $200.

The sisters’ attorney and advocacy groups have long said $11 was taken in the robbery, arguing life sentences were excessive for such a small sum. That amount is in dispute, though: One of the victims testified he was robbed of about $200, while a boy, 14, involved in the crime testified his cut was between $9 and $11.