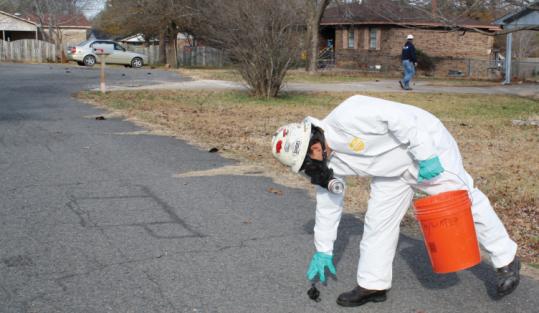 Dead birds were collected in Beebe, Ark., Saturday, after more than 3,000 fell from the sky. The carcasses were sent for tests. (Warren Watkins/ The Daily Citizen via Associated Press)
By Jeannie Nuss Associated Press / January 4, 2011

Karen Rowe, an ornithologist with the Arkansas Game and Fish Commission, said many of the birds were injured when they struck the ground, but it was not clear whether they were alive when they hit.

Rowe stopped short of declaring the mystery solved, saying labs planned to test bird carcasses for toxins or disease. Another theory was that violent thunderstorms might have disoriented the flock, or that even just one bird could have led the group in a fatal plunge to the ground.

Beebe residents awoke Saturday to find thousands of dead birds littering a 1.5-square-mile area. The red-winged blackbirds rained onto rooftops, cars, sidewalks, and fields. One struck a woman walking her dog. Another hit a police cruiser.

The birds will not be missed. Large roosts like the one at Beebe can have thousands of birds that leave ankle- to knee-deep piles of droppings.

Nearly a decade ago, state wildlife officials fired blanks from shotguns and cannons to move a roost of thousands of blackbirds from Beebe, but in recent years many of the migratory birds returned.

Bird carcasses were shipped to the Arkansas Livestock and Poultry Commission and the National Wildlife Health Center in Madison, Wis., for examination. Researchers in Georgia also asked for a set of the dead birds.

A few grackles and a couple of starlings were among the dead. Those species roost with blackbirds, particularly in winter.

Violent weather rumbled over much of the state Friday. Officials initially thought lightning might have killed the birds directly or startled them to the point that they became confused.