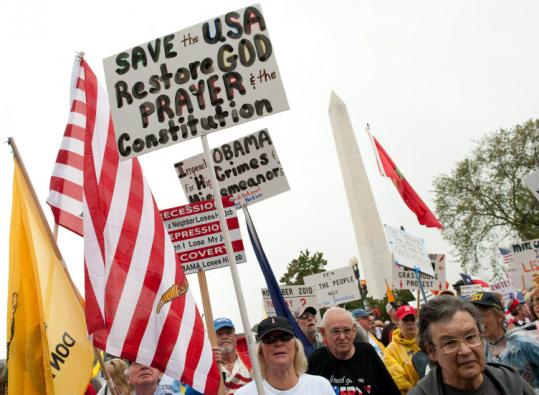 A new rule for the House — that lawmakers cite constitutional authority for a bill — is a priority of the Tea Party movement. (Nicholas Kamm/ Agence France-Presse/ Getty Images)
By Philip Rucker and Krissah Thompson Washington Post / January 2, 2011

WASHINGTON — When Republicans take over this week, they will do something that apparently has never been done before in the 221-year history of the House of Representatives.

They will read the Constitution aloud.

And then they will require that every new bill contain a statement by the legislator who wrote it citing the constitutional authority to enact the proposed law.

Call it the Tea Party-ization of Congress.

“It appears that the Republicans have been listening,’’ said Jeff Luecke, a sales supervisor and Tea Party organizer in Dubuque, Iowa. “We’re so far away from our founding principles that, absolutely, this is the very, very tip of the iceberg. We need to talk about and learn about the Constitution daily.’’

The changes are on a long list of new rules Republicans will institute in the House when they assume the majority on Jan. 5.

After handing out pocket Constitutions at rallies, after studying the document article by article and demanding that Washington return to its founding principles, Tea Party activists have something new to applaud. A pillar of their grass-roots movement will become a staple in the bureaucracy that governs Congress.

But the question being debated in legal and political circles is whether the constitutional rules are simply symbolic flourishes to satisfy an emboldened and watchful conservative base.

“I think it’s entirely cosmetic,’’ said Kevin Gutzman, a history professor at Western Connecticut State University who said he is a conservative libertarian and sympathizes with the Tea Party movement.

“This is the way the establishment handles grass-roots movements,’’ he added. “They humor people who are not expert or not fully cognizant. And then once they’ve humored them and those people go away, it’s right back to business as usual. It looks like this will be business as usual — except for the half-hour or however long it takes to read the Constitution out loud.’’

The reading of the Constitution will occur Thursday, one day after the swearing-in of speaker-designate John Boehner, Republican of Ohio. The 4,543-word document, including all 27 amendments, could be read aloud in just 30 minutes. But the exercise probably will last longer.

The moment seems designed for maximum effect. Many lawmakers will participate, with one representative reading a portion of the document before yielding the floor to another representative to continue reading and so forth. Boehner spokesman Brendan Buck said Democratic lawmakers are welcome to participate if they wish.

“We always hear members of Congress talking about swearing an oath to represent their constituents when in reality the only oath we take is to the Constitution,’’ Boehner said in a speech this fall. “We pledge ‘to support and defend the Constitution of the United States.’ No more, no less.’’

The House Historian’s Office found no record of the Constitution having been read aloud on the House floor. Lawmakers have twice submitted the text into the Congressional Record.

The historic nature of the reading surprised some Tea Party leaders.

“That’s pretty extraordinary,’’ said Mark Meckler, cofounder of Tea Party . “It shows the extraordinary times now. Regular people all across the country are focused on the Constitution, and the message was sent to Congress that we want them to do the same.’’

Akhil Reed Amar, a constitutional scholar at Yale Law School, said he supports the reading. “I like the Constitution,’’ said Amar, author of “America’s Constitution: A Biography.’’ “Heck, I’ll do them one better. Why only once in January? Why not once every week?’’

But Amar added: “My disagreement is when we actually read the Constitution as a whole, it doesn’t say what the Tea Party folks think it says.’’

Amar argues that the Constitution charters a “very broad federal power’’ and is not the narrow state’s rights document that Tea Party activists present it as.

The constitutional authority rule will restart this debate with each new bill. Every piece of legislation now will require a statement from its sponsor outlining where in the Constitution Congress is empowered to enact such a law.

This is such a big change to the daily routine on Capitol Hill that Republican leaders distributed a five-page memo to lawmakers outlining how to determine a bill’s constitutional authority. They also hosted training sessions for legislative aides.

The rule has been a top Tea Party priority; it was the first recommendation in the movement’s “Contract From America.’’

“It’s a big deal,’’ said Brendan Steinhauser, director of federal and state campaigns at Freedom Works. “That’s a very basic starting point for all legislation — not only should we do it, can we afford to pay for it, but can we do it?’’

Interpretations of the Constitution can vary widely. The ultimate deciders will be the lawmakers themselves, who can vote down any measure they believe to be unconstitutional.