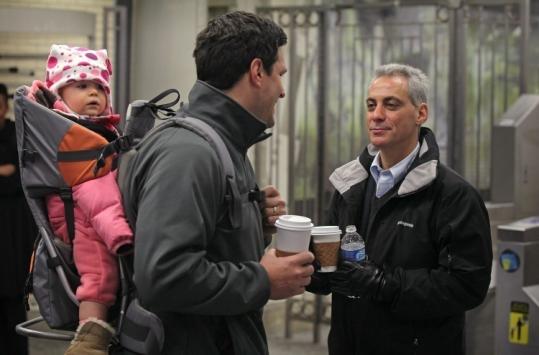 CHICAGO — Rahm Emanuel forged ahead with his campaign for Chicago mayor yesterday after an elections panel ruled his name can appear on the Feb. 22 ballot, rejecting arguments the former White House chief of staff forfeited his city residency when he went to work for President Obama in Washington.

The decision of the Chicago Board of Election Commissioners removed a major obstacle to Emanuel’s ambitions to replace retiring Mayor Richard M. Daley. Emanuel said it allowed him to “turn the page’’ and focus on issues more important to voters.

“It reminds . . . everybody what the priorities are facing the city, which is about safer streets, strong schools, and stable city finances so we can create the economy and business environment, so we can produce the type of jobs we need in this city,’’ Emanuel said after greeting diners at the landmark Berghoff restaurant downtown.

More than two dozen people had challenged Emanuel’s candidacy, contending he didn’t meet a requirement that he be a resident of Chicago for a year before the election. A lawyer for some vowed to immediately appeal the ruling and fight all the way to the Illinois Supreme Court if necessary.

Board hearing officer Joseph Morris ruled yesterday morning that evidence showed Emanuel had no intention of terminating his residency in Chicago, left the city only to work for Obama, and often told friends he intended to live in Washington for no more than two years.

Morris said Emanuel’s name should be placed on the ballot, and the elections board agreed later in the day.

Late yesterday afternoon, State Senator James Meeks, the pastor of a South Side megachurch, said he was dropping out of the race.

Since returning to Chicago in October to run for mayor, Emanuel has enjoyed strong name recognition and already has run several television ads.

A recent Chicago Tribune/WGN poll showed him with the support of 30 percent of those surveyed. While Emanuel was the only candidate with support in the double digits, the poll also showed 30 percent as undecided.

Republicans line up rules for next House WASHINGTON — House Republicans pledged yesterday to retain a controversial ethics office, post legislation on the Internet before votes, and insist that bills requiring an increase in spending be balanced with cuts elsewhere after they take control next month.

The House Office of Congressional Ethics has irritated several members who were subject to lengthy investigations that criticized their conduct. The office, established by Democrats, is run by a board of people from outside Congress. It has no disciplinary powers but can recommend further investigation by the House-run ethics committee.

Many Republicans originally opposed the office. There could be attempts to weaken the office after the new Congress convenes, but they are now seen as unlikely to pass.

The GOP will also continue a rule that prohibits former members of Congress who are registered lobbyists from using the House gym, where they once could lobby lawmakers.

The rules propose that no legislation receive a House vote until it’s been on the Internet for at least three days. In the past, members have complained that major bills came up for votes before many could read the legislation or last-minute changes.

House committees would have a requirement to post online any conflicts of interest with witnesses who appear at hearings. Also, postings would show which members attended a committee hearing or business meeting.

The proposals include several new rules on spending and taxes, including:

■ Repealing a rule that authorizes an automatic increase in the nation’s debt limit when the House approves a budget resolution, the initial step in congressional procedures for financing the government.

■A requirement that if a bill requires increased spending, money would be cut by an equal or greater amount elsewhere.

■ A requirement that tax increases could not be used to pay for new spending.

■ A determination that highway funding, with some exceptions, would be treated as other spending bills, subject to any member’s attempt to reduce the amounts. Current House rules prohibit amendments to eliminate spending for most highway or mass transit programs. There would be an exemption to protect the Highway Trust Fund, to ensure revenues continue for road and mass transit projects.

Spokesman Robert Gibbs said the president’s advisers are looking through the recommendations from Obama’s deficit commission, though he didn’t say which proposals the president supports. The report includes calls for cuts to entitlement programs and raising the Social Security retirement age.

Gibbs said Obama will deliver his annual address to Congress late next month, after the state visit of President Hu Jintao of China on Jan. 19.

The spokesman’s remarks came during an online question and answer session on Twitter.