Brown draws ire on the right 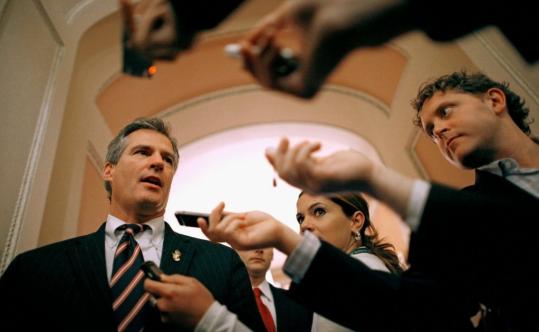 Senator Scott Brown spoke with reporters Monday after a closed session on the New START pact. His backing of the treaty and other issues has alienated some of his former supporters. (Chip Somodevilla/Getty Images)
By Matt Viser Globe Staff / December 24, 2010

WASHINGTON — Senator Scott Brown’s decision to buck his party leadership in recent days on the “don’t ask, don’t tell’’ military policy and on a nuclear arms treaty has set off a new wave of anger among some of the activists who helped elect him — and renewed talk among conservatives that he might face a primary challenge.

Some Tea Party movement leaders who dislike Brown’s votes acknowledge that the Massachusetts Republican has demonstrated his independent and pragmatic streak, and by doing so may strengthen his chances at reelection in 2012. No primary challenger has emerged, and it is unclear whether a newcomer could wage a serious fight against Brown and his $6.8 million war chest.

But the threat of a primary challenge from conservatives — as well as the potential that national Tea Party groups will withhold financial support — appears to have grown, according to the movement’s activists. Brown’s votes in the past week follow his crucial support for the overhaul of financial regulations, which remains a particular sore point with conservatives.

“I think that there will be a primary challenge,’’ said Christen Varley, president of the Greater Boston Tea Party. “There’s enough of an underground movement in the Tea Party movement as seeing him as not being conservative enough. There probably will be multiple people who attempt to run against him.’’

Varley said it is too early to name a possible opponent, and she acknowledged that Brown’s campaign war chest and statewide organization would probably be enough to fend off an opponent. But if Brown has to devote energy and resources to a primary campaign, it could put him at a greater disadvantage in a general election in which Democrats will be fighting hard to reclaim a seat they consider theirs.

In addition to his votes to repeal the military’s “don’t ask, don’t tell’’ ban on servicemembers who are openly gay or lesbian, his support for the New START nuclear arms treaty with Russia, and his backing of financial regulations, Brown has also upset some former supporters by voting for President Obama’s compromise on extending the Bush era tax cuts, a plan some Tea Party activists oppose because it will add nearly $1 trillion to the deficit.

“I have talked to people who have said unless he turns around on some of these issues that they don’t like, they’re not going to work for him again,’’ said Matt Clemente, the Massachusetts director for the Tea Party-affiliated group FreedomWorks, which has 12,400 members in the Bay State. “We’re going to watch very closely over the next year and a half . . . and see if he’s going to be the ally that everyone had hoped it was going to be.

“Right now I don’t think the bond has totally evaporated. He’s definitely turned off some voters, but I wouldn’t say it’s enough for it to be a critical deciding factor at this point.’’

FreedomWorks said it would tally scorecards on financial issues to help determine whether they would support Brown’s reelection campaign in 2012.

“There’s a lot of votes between now and then. We’ll be watching those,’’ said Max Pappas, the group’s national vice president of public policy. “There were votes we weren’t especially excited about, but his score is certainly better than what [Democratic challenger] Martha Coakley’s would have been.’’

Shelby Blakely, a spokeswoman for the Tea Party , which provides support for more than 1,000 community-based Tea Party groups nationwide, was also less than enthusiastic about Brown. “I just don’t see the Tea Party getting energized for him,’’ she said. “I don’t see them using their own money and own time as they did before.’’

Diana Reimer, cofounder of the Philadelphia Tea Party Patriots, drove to Massachusetts a year ago and spent a week campaigning for Brown. In 2012, she said, she’ll be more focused on conservative candidates in Pennsylvania — and not getting a “half-conservative’’ like Brown put back into office.

Still, it’s too early to tell how much the view of national Tea Party groups will affect Brown’s reelection chances. Some groups became involved in the Massachusetts special election last January because it was the only election being held at the time. They also seized upon the symbolism of taking the seat long held by Senator Edward M. Kennedy.

But in losing some conservatives, Brown could be picking up moderates he needs to win reelection in a state in which Democrats generally did well in last month’s midterm elections compared with most of the nation.

“People who have followed Scott Brown’s career know that he’s not a partisan figure,’’ said Eric Fehrnstrom, one of Brown’s top political advisers. “Scott went to Washington and he did exactly what he said he was going to do, which is to be an independent voice.’’

Brown’s vote to repeal “don’t ask, don’t tell’’ is not a major issue among those Tea Party activists who say they are more concerned with financial issues than social ones. But that vote upset other onetime supporters. Kris Mineau, president of the Massachusetts Family Institute, said the vote “threatens key support from the energized voters who worked to get him’’ elected.

“Certainly we are appalled and dismayed about Senator Brown’s actions regarding the repeal of ‘don’t ask, don’t tell,’ ’’ Mineau said in an interview. “The people in Massachusetts who vote for family values are equally dismayed and discouraged . . . This was a very important issue to us. Certainly it gives people second thoughts.’’

Mineau — who has given Brown at least $3,000 since 2003, when Brown was a state senator — said the senator’s overall record was a “mixed bag’’ but would not say whether it had caused an irreparable split.

“All I can say is I’m very disappointed,’’ he said. “The senator and I have discussed this one on one, and we’ve agreed to disagree.’’

Brown has been making strategic moves to expand his donor base, leaning more heavily on Massachusetts residents for support while also trying to make inroads with national campaign donor networks.

During the special election, when Brown became a national phenomenon, he was heavily reliant upon non-Massachusetts residents for support. In the 19 days before he was elected, nearly 70 percent of the 12,773 contributors who gave him more than $200 were from outside Massachusetts, according to a Globe analysis in February.

Since his Jan. 19 election victory, however, Brown has collected $1.1 million in donations of more than $200, with more than 65 percent of those coming from Massachusetts residents, according to data compiled by the Center for Responsive Politics.

Some of Brown’s fellow Republican senators said that Brown can’t be viewed the same as others who may have to rely on Tea Party support.

“People ask me about Scott Brown, and I point out a very obvious fact: He’s from Massachusetts,’’ said Senator Bob Bennett, a Utah Republican who lost his seat this year to a Tea Party-backed candidate who criticized Bennett over compromising too much with Democrats. Bennett said it is asking too much of Brown to “be a national conservative in the mold of some of the conservative pundits.’’

Senator Lindsey Graham, a South Carolina Republican, has been adamantly against the “don’t ask, don’t tell’’ repeal and approving the nuclear arms treaty during the lame-duck session. But he wouldn’t criticize Brown.

“Scott Brown needs to be Scott Brown,’’ Graham said. “Be independent and let the chips fall where they may.’’