11 from GOP back pact with Russia 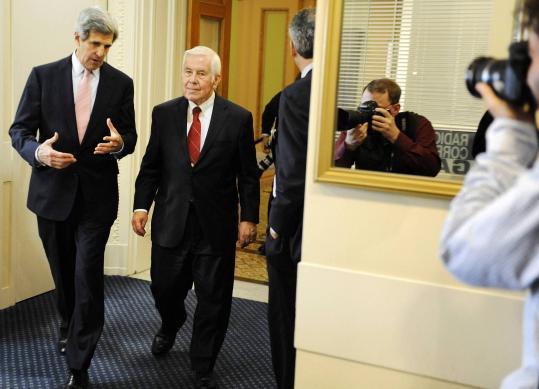 WASHINGTON — The US Senate, in a key test vote, moved yesterday toward final passage of a nuclear arms pact with Russia, setting up a likely foreign policy victory for President Obama and a hard-won achievement for Senator John F. Kerry of Massachusetts, who shepherded the treaty through fierce GOP opposition.

With a 67-to-28 vote to end debate, supporters demonstrated they have the two-thirds majority needed for final ratification, which could come as early as today.

Eleven Republicans joined Democrats in support, yet another demonstration of bipartisanship in a surprisingly productive lame-duck session of Congress. Republicans and Democrats also came together in sufficient numbers to pass a two-year tax-cut extension for people at all income levels and to repeal the military’s “don’t ask, don’t tell’’ ban on gays in the military.

Kerry, chairman of the Senate Foreign Relations Committee and a constant presence on the Senate floor in recent days, confidently predicted that the New START Treaty will be ratified today. The treaty would reduce nuclear weapons by both sides by about one third.

“We are on the brink of writing the next chapter in the 40-year history of wrestling with the threat of nuclear weapons,’’ Kerry said in a statement. “We’ve spent months building toward this.’’

The New START Treaty, signed by Obama and President Dmitry Medvedev of Russia last spring, commits the world’s two largest nuclear powers to cut the number of atomic warheads they deploy from 2,200 to 1,550 within seven years and limits launchers to 700. It also establishes a series of protocols so each side can regularly inspect the other’s arsenal to ensure compliance.

Such inspections, which began during the height of the Cold War and are widely considered an element of stability, have been halted since the previous nuclear weapons agreement between Moscow and Washington expired at the end of 2009.

Senate ratification of the treaty, which is required by the Constitution, would mark a key victory for Obama’s agenda to reduce nuclear proliferation. The treaty has long been considered by administration officials to be a first step in a series of international agreements aimed at reducing nuclear stockpiles, ending nuclear weapons tests, and ultimately halting the production of weapons-grade nuclear material.

Scott Brown of Massachusetts was among several GOP senators who came out in favor of the treaty on Monday. More announced their support throughout the day yesterday.

“I look forward to its ratification,’’ Senator Bob Corker, Republican of Tennessee, said in a speech yesterday on the Senate floor. “And I hope many others will join me in that process.’’

But some observers said yesterday that ultimate victory, which will likely come over the objections of the Senate minority leader, Mitch McConnell of Kentucky, and other GOP leaders, will exact a heavy price: the end of a string of overwhelmingly bipartisan nuclear reduction pacts.

Previous arms control agreements with Russia have been adopted with no fewer than 84 votes. Even the most optimistic estimates suggest that the number in favor of ratification today will not even come close to that figure.

“It is looking like the only arms control treaty to earn the opposition of a Senate minority leader,’’ Sokolski said. “Worse, it is likely to garner the least votes of any to date; certainly far fewer than the traditional 90-plus margin for such understandings.’’

As early as April, when Kerry’s panel first took up the treaty, he expressed concern that the poisonous partisan atmosphere in Congress would damage the long-standing bipartisanship on international agreements.

The modest Republican support to date comes after months of wrangling, including major concessions from the Obama administration to invest billions of dollars in the remaining US arsenal. An amendment offered by four Republican senators, meanwhile, would stipulate that the treaty will not bind US efforts to develop missile defenses.

“We’ve been engaged in a healthy exchange of views,’’ Kerry said after yesterday’s vote. “Those who are skeptical have voiced their concerns and we have listened carefully. They’ve made significant contributions to the dialogue.’’

Leading advocates of the treaty breathed a sigh of relief that the pact appeared on track to be adopted but also said more will need to be done.

“The treaty is extremely important but it still leaves the US and Russia with an enormous amount of weapons,’’ said Daryl Kimball, executive director of the Arms Control Association, a nonpartisan think tank. “The amount of firepower we have 20 years after the end of the Cold War is frightening.’’

But others suggested future efforts to reduce nuclear arms in the form of treaties will be exceedingly difficult, especially as more Republicans are seated in the Senate in January.

Additional arms control measures the Obama administration says it wants — including adoption of the Comprehensive Test Ban Treaty — will be much harder, predicted John Isaacs, a nonproliferation specialist at the Center for Arms Control and Nonproliferation.

“In the future nothing is going to be easy,’’ Isaacs said.

Bryan Bender can reached at bender@globe.com