Bipartisan $858b bill a victory for Obama 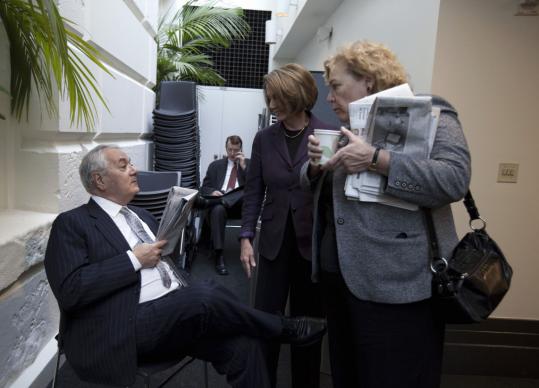 WASHINGTON — The House passed an $858 billion package of extended tax cuts and stimulus spending late last night, saving at least hundreds of dollars for nearly all Americans and heralding the first broad bipartisan compromise of the Obama presidency.

The 277-to-148 vote was a political victory for President Obama, who made the case for compromise over complaints from the base of the Democratic Party. Some longtime Obama backers fought the president’s deal late into the night, contending that he had let middle-class America down by not fighting harder to keep a campaign promise: end the George W. Bush-era tax cuts for wealthy Americans.

Instead, the group Obama had to rely on for critical support last night was the one he had spent his first two years battling, Republicans.

“The road to prosperity is not through tax increases,’’ said Representative Patrick Tiberi, an Ohio Republican and supporter of the deal.

The bill, which Obama could sign as early as today, won the support of 139 Democrats and 138 Republicans, but only after Republicans beat back an effort to substantially alter the pact. The Senate endorsed the agreement on Wednesday in a vote of 81 to 19.

“Thanks to the leadership of Barack Obama, the American people can rest assured they will not get a tax increase,’’ said Representative Jared Polis, a Colorado Democrat.

But the deal is a bitter pill for some liberals, who have complained the agreement is tilted toward the rich. “I believe the provisions in this bill that give away billions and billions and billions to the wealthy are unnecessary, unproductive, and irresponsible,’’ said Representative James P. McGovern, a Worcester Democrat who voted no.

“There’s a big difference between compromise and surrender, and what this bill represents is a complete surrender of Democratic principles,’’ Representative Stephen F. Lynch, a South Boston Democrat, said in a floor speech. He also voted no.

A number of Republicans also opposed the deal. “This is a package we simply can’t afford,’’ said Representative Jeff Flake, an Arizona Republican who objected to a new cut in the payroll tax. “Let’s wait until January. Let’s wait until we get a new Congress.’’

In the end, however, most lawmakers looked past their apprehensions and toward Dec. 31, when the tax cuts are scheduled to expire. Had they not acted, tax rates would have gone up for all Americans.

What remains to be seen is whether the compromise will be the beginning of a new era of deal-cutting in Washington after the GOP’s midterm gains divided control of the Congress, or a one-time marriage of convenience forced by the pressure of tax hikes and a ticking clock.

“I see this as a compromise born out of necessity,’’ said Bill Whalen, a research fellow at the Hoover Institution who studies political trends. “Republicans could not cave in their insistence on extending the tax cuts, and the president realized he had to get a deal done.’’

Despite the bipartisan vote, the fight over the tax cuts will go on. The deal proposed only a two-year extension of lower tax rates, which means the issue will return in 2012 at the height of the next presidential campaign.

The tax agreement, negotiated mostly by the White House and Senate Republicans, involves core issues for both parties, and offers something for nearly every constituency in America.

The legislation will extend all of the expiring income tax cuts, renew a federal program to extend unemployment benefits for the longtime jobless, and retain or create a series of other tax cuts for businesses and individuals. Many Democrats object to extending the tax cuts on couples’ income above $250,000 per year, and they have criticized Obama for giving in to Republican demands that the lower rates be extended to all income levels.

In an angry rebuff to the president, House Democrats vowed in a non-binding caucus vote last week to not even consider the deal until it was overhauled. But as emotions cooled, lobbying from the White House and the overwhelming bipartisan vote in the Senate put tremendous pressure on House Democrats not to kill the deal and risk taking the blame for higher middle-class taxes.

Some House Democrats still insisted on a last-minute chance to change the deal’s treatment of the estate tax, saying the proposed rate of 35 percent was too low and the threshold for assets exempt from any tax — $5 million for individuals — was too high. Before the final vote on the bill, the House voted down an amendment to impose the 2009 rates on the deal — a 45 percent tax on assets above $3.5 million.

The vote on that measure was 233 against and 194 in support. Democrats overwhelmingly backed it, but all 173 Republicans objected. Though the estate tax change was not expected to pass, it allowed members an opportunity to get their objections on the record.

Senate Republicans had warned that any changes to the deal would scuttle it.

Democrats also complained about the deal’s temporary 2-percentage-point cut in the payroll tax, which would pump more than $100 billion into the economy but leave a hole in Social Security to be backfilled with borrowed money. Democrats fretted that the temporary cut would set a precedent that will be politically difficult to discontinue.

“This represents a serious threat to the solvency of the Social Security system,’’ said Representative Richard Neal, a Springfield Democrat who voted no on the bill.

Nearly every member of the House who spoke on the bill yesterday found something not to like about it — even many of those who supported it.

“I don’t like the fact that we have unemployment benefits extended without being paid for,’’ said Representative David Dreier, Republican of California. But “increasing taxes on anyone when you’re dealing with slow economic growth is exacerbating’’ the problem.

Representative Louise Slaughter, a Democrat from New York, said she opposed extending tax cuts for the wealthy, but “that is the price we have to pay for helping the middle class.’’