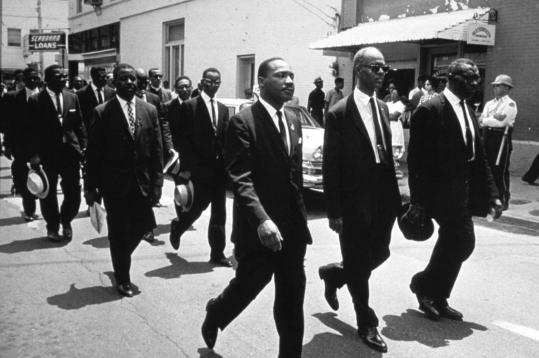 The Rev. Martin Luther King Jr. (front left) walked in the funeral procession for Medgar Evers in June 1963. Evers was shot and killed in the driveway of his home in Jackson, Miss. (File/Associated Press)
By Shelia Byrd Associated Press / December 12, 2010

JACKSON, Miss. — Mississippi bred some of the worst violence of the civil rights era, yet nearly a half-century after a barrage of atrocities pricked the conscience of the nation, it is one of the few civil rights battleground states with no museum to commemorate the era.

Emmett Till, a 14-year-old black boy, was bludgeoned to death for “sassing’’ a white woman and his body dumped in the Tallahatchie River in 1955. Mississippi NAACP Field Secretary Medgar Evers was gunned down outside his home by a white sniper in 1963. And three young voter registration activists — James Chaney of Mississippi and Michael Schwerner and Andrew Goodman, both of New York —were murdered by the Ku Klux Klan during the Freedom Summer of 1964.

The absence of a state museum to acknowledge and commemorate these events leads some to question whether Mississippi is ready to embrace its role in history.

“It comes to a point that I don’t think Mississippi wants her history clearly told,’’ said state Senator David Jordan, a black Democrat from Greenwood in Leflore County.

A strong push for a museum didn’t come until 2006, when state Senator Hillman Frazier, a Democrat from Jackson, sponsored a resolution to create a museum study commission. Governor Haley Barbour, a Republican, took the reins on the project, which appeared to have his support.

A commission that Barbour appointed chose the private Tougaloo College in north Jackson as the museum site in 2008 and gave the project an estimated price tag of $73 million. Tougaloo was a hub of civil rights activity during the 1960s and 1970s.

Little else has happened to develop the museum. Organizers raised $470,000, but more than half was spent on consultants. Businessman John Palmer, the acting treasurer for the planning commission, said $108,000 is left.

Supporters of a museum tout it as a tourism draw. The National Civil Rights Museum in Memphis drew 207,143 visitors between July 2008 and June 2009 and had an operating revenue of $4 million.

About 170,000 people visit the permanent exhibit and participate in the programs at the Birmingham Civil Rights Institute each year, said Lawrence J. Pijeaux, the Alabama museum’s president and chief executive.

“It means we’re bringing people to the state and it puts revenue in the city and the state,’’ said Pijeaux.

William Winter, a former Mississippi governor noted for his work to improve race relations in the state and a member of Barbour’s museum study commission, disagreed with the suggestion that the state’s leaders aren’t truly interested in creating a museum.

“The problem has not been resistance to the concept of having a civil rights museum,’’ Winter said. “But I do think it’s important that those who are interested get together on where it would be located.’’

He said the Tougaloo site drew criticism from those who wanted the museum in downtown Jackson.

Organizers have said fund-raising dried up because of the recession. Frazier said Barbour was to appoint a board to advance the project, but never did.

The governor still supports the project, but “it’s going through a number of trials and tribulations,’’ said Barbour spokesman Dan Turner.

“There was a split on the committee in choosing the site. Not having that unity behind it helped it lose momentum,’’ he said. “Charitable donations are down across the board. Raising money at this time is really difficult.’’

While the museum project languished, Barbour and lawmakers approved $2.1 million to begin work on a trail of markers describing significant civil rights events. The move didn’t please everyone.

“If this is the alternative to the museum, that’s horrid. That’s shameful. You can’t store artifacts out in the street,’’ said Owen Brooks, 82, a Boston native who came to Mississippi in 1965 and participated in literacy, community development, and voting rights projects.

Now, even the trail project has hit a snag. It is not clear who dropped the ball.