Senate to vote on impeachment case against Louisiana judge

Jurist is charged with four counts of corruption 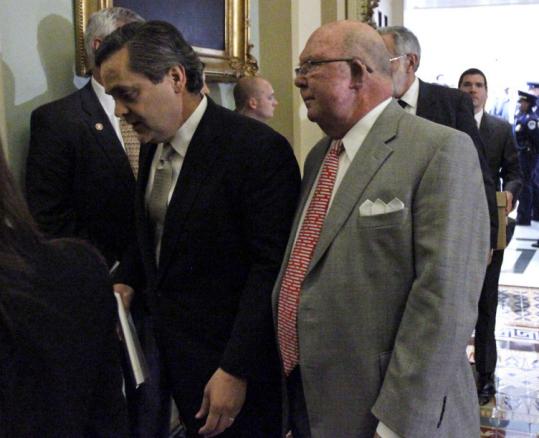 WASHINGTON — The Senate wrapped up its first impeachment trial since the 1999 case against President Bill Clinton, scheduling votes for today on the fate of a Louisiana judge accused of corruption.

If convicted, US District Judge G. Thomas Porteous would become just the eighth federal judge to be removed from office. He faces four articles of impeachment that were unanimously approved by the House in March.

Porteous, who sat quietly before senators in the well of the Senate during arguments yesterday, has acknowledged accepting cash and favors from lawyers and bail bondsmen doing business in his court, and filing for bankruptcy under a false name. He also is accused of lying to the Senate during his judicial confirmation.

The Senate began a rare closed session late yesterday to deliberate. A two-thirds majority vote is needed for conviction.

House prosecutors told senators that allowing him to remain on the bench would erode public confidence in the courts and make a mockery of the federal judiciary.

“The evidence demonstrates that Judge Porteous is dishonest and corrupt, and does not belong on the federal bench,’’ Representative Bob Goodlatte, Republican of Virginia, said during the proceeding — just the 16th judicial impeachment trial in US history. “He has brought disgrace and disrepute to the federal bench.’’

Defense lawyer Jonathan Turley argued Porteous may have made mistakes and could be considered a “moocher’’ for soliciting meals and gifts. But his actions don’t come close to the “high crimes and misdemeanors’’ standard outlined in the Constitution for offenses such as bribery or treason, Turley said.

“An appearance of impropriety? Is that what we’re going to substitute high crimes and misdemeanors for?’’ Turley said, arguing that Congress would be setting a dangerous precedent by voting to convict, in part because some of the conduct in question came before Porteous was a federal judge.

Over months of hearings, House prosecutors laid out a damaging case against Porteous, portraying him as a heavy drinker with a gambling problem who was falling deeply into debt.

They say he began accepting cash, meals, trips, and other favors from people with business before his court, beginning as a state judge in the 1980s and continuing after he was appointed to the federal bench by Clinton in 1994.

Two lawyers who once worked with Porteous have testified that they gave him thousands of dollars in cash, including about $2,000 stuffed in an envelope in 1999, just before Porteous decided a major civil case in their client’s favor. They also said they paid for meals, trips, and part of a bachelor party for one of Porteous’s sons in Las Vegas, including a lap dance at a strip club.

“Counsel has taken to calling it a wedding gift, as if it were a piece of china from the Pottery Barn,’’ House prosecutor Adam Schiff, Democrat of California, said of the $2,000 cash gift. “This is at best defense counsel at his most creative.’’

Another witness, New Orleans bail bondsman Louis Marcotte, described a long-standing relationship in which Marcotte and his employees routinely took Porteous to lavish meals at French Quarter restaurants, repaired his automobiles, washed and filled his cars with gas, and took him on trips. In return, Porteous manipulated bond amounts for defendants to give Marcotte the highest fees possible, said Marcotte, who served 18 months in prison on related corruption charges.

Turley argued that much of the behavior in question was business as usual in the New Orleans-area legal community. He said accepting cash from the lawyers was a “colossal mistake’’ but insisted that the lawyers were longtime friends who viewed the money as a personal matter.

Turley said other charges are exaggerated, including the bankruptcy filing, which Porteous maintains he initially filed under the name “G.T. Ortous’’ only to avoid embarrassing publicity.

Porteous was caught up in a 1999 FBI investigation that found widespread corruption in Louisiana’s Jefferson Parish. The sting netted more than a dozen convictions, but Porteous was never charged with a crime, in part, authorities said, because statutes of limitations had expired.

The Justice Department referred a misconduct complaint to the courts. Porteous was suspended from the bench, and the Judicial Conference of the United States recommended that Congress consider impeachment.

Porteous would be the first judge to be impeached and convicted since 1989, when two judges — Walter Nixon of Mississippi and Alcee L. Hastings of Florida — were removed from office. Hastings went on to win a seat in Congress, where he still serves.