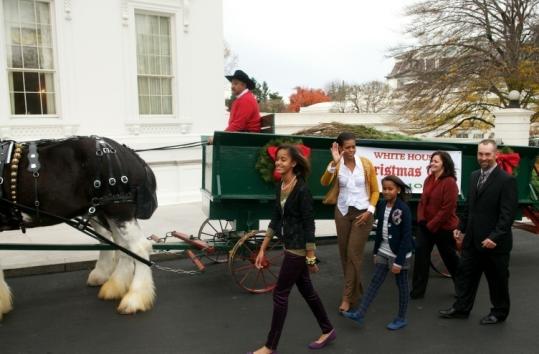 WASHINGTON — President Obama needed 12 stitches in his lip after taking an errant elbow during a pickup basketball game yesterday morning with family and friends visiting for the Thanksgiving holiday, the White House said.

First word of the injury came in a statement from press secretary Robert Gibbs nearly three hours after the incident.

The White House identified the player causing the injury as Rey Decerega, director of programs for the Congressional Hispanic Caucus Institute.

Obama received the stitches under local anesthesia in the doctor’s office on the ground floor of the White House after returning home. Doctors used a smaller filament than typically used, which increases the number of stitches but makes a tighter stitch and leaves a smaller scar.

The president had gone to nearby Fort McNair to indulge in a game of basketball, one of his favorite athletic pursuits. It was a five-on-five contest involving family and friends. Among the players were Obama’s nephew, Avery Robinson; Education Secretary Arne Duncan; and Reggie Love, Obama’s personal assistant, who played at Duke University.

The White House said the injury happened during their fifth and final game when Decerega turned to take a shot and hit Obama, who was playing defense.

Obama emerged from the building wearing a short-sleeve T-shirt and gym pants, dabbing at his mouth with what appeared to be a wad of gauze.

“I learned today the president is both a tough competitor and a good sport,’’ Decerega said in a statement through the White House.

“I enjoyed playing basketball with him this morning. I’m sure he’ll be back out on the court again soon.’’

Many in RNC would like Steele to leave quietly
WASHINGTON — A significant bloc of Republican National Committee members wants embattled chairman Michael Steele to step aside, but the rank and file members have failed to settle on a clear alternative.

More than four dozen interviews with members of the 168-member central committee found fear that a badly damaged Steele could emerge from the wreckage of a knockdown, drag-out fight to head the party as it challenges President Obama in 2012. While most agree that Steele’s time has been rough and costly, the members also recognize that a leadership fight could overshadow gains that Republicans made in the midterm elections.

With balloting set to take place in just two months, many just want Steele to go.

“You can’t keep spending the kind of money they’re spending every month just to operate the RNC,’’ said committee member Ada Fisher of North Carolina. “I would hope he would step aside.’’

In interviews with 51 committee members, 39 said they preferred Steele not be on the ballot when they meet near Washington in mid-January to pick their leader.

Steele hasn’t said whether he will pursue the 85-vote majority needed for a second term. He has been is talking to committee members, highlighting his role in the Republican landslide.

Chicago has pros, cons as Obama's potential base
WASHINGTON — When President Obama kicks off his reelection campaign sometime in the next few months, senior advisers say, it is virtually certain that his headquarters will be located in Chicago.

But should it be?

Full of nostalgia for the 2008 campaign and keenly aware of the anti-Washington vibe in the electorate, advocates say the arrangement would give the president’s team a chance to get away from inside-the-Beltway conventional wisdom and to recapture the grass-roots energy that helped Obama beat two candidates entrenched in the capital’s culture two years ago.

Yet no president or vice president in recent history has won reelection with his headquarters so far from the White House. The arrangement would splinter the president’s staff, sending some of his most trusted advisers to another time zone, and would risk creating a competing power center in Illinois.

Because it would limit their casual contact, the distance could also force the White House and campaign staff members to adhere more rigidly to requirements that their work be kept separate. Not to mention that the campaign staff would rarely, if ever, see the candidate.

White House officials say that no decision has been made.