Dogged by doubts in bedbug-detection business

Complaints of false alerts are up as demand rises 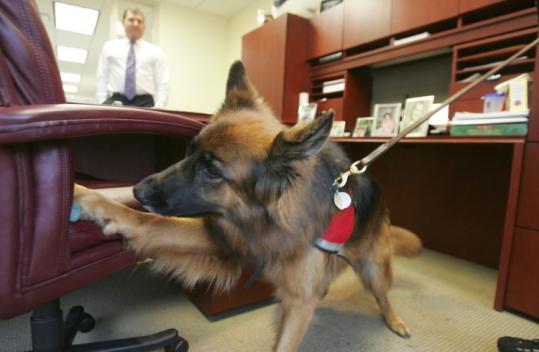 NEW YORK — If any heroes have emerged in the bedbug epidemic sweeping households, movie theaters, retailers, schools, offices, you-name-it nationwide, it is surely the bedbug-sniffing dogs.

Cute, diligent, and armed with highly sophisticated detection tools — their noses — these dogs are fast becoming the American equivalent of the St. Bernard rescuing the snowbound in the Alps. Commercials vaunt bedbug-sniffing dogs’ prowess and purport up to 98 percent accuracy. In New York, a bedbug-sniffing beagle named Roscoe has become so well known — he has a Facebook page and now an iPhone app — that fellow beagles often are mistaken for him on the street.

But as the number of reported infestations rises and the demand for the dogs soars, complaints from people who say dogs have given false alerts on bedbugs are also climbing. And within the bedbug industry, where some dog trainers and sellers are on back order until next spring despite the dogs’ $11,000 price tag, there are fears that a rise in so-called false positives by dogs will harm their credibility and business.

“Many pest-control companies have the same frustration,’’ said Michael F. Potter, an entomology professor at the University of Kentucky, “that they often follow behind dogs that are indicating bedbugs, and they can’t find anything.’’

In a co-op near Union Square in Manhattan, a dog indicated bedbugs in a third of the 50-odd apartments, although physical traces of bedbugs were found in only five, according to one resident. He resisted pressure from the co-op board to get a $1,500 treatment because his family had not been bitten by or seen traces of bugs. A designer on the Upper West Side of Manhattan said a dog brought in by her co-op to inspect every apartment had alerted to bedbugs in her home even though neither she nor her husband had been bitten. An inspection by a different exterminator revealed no bedbugs, but her building paid thousands of dollars for apartments to be treated, including those where bedbugs had not been found.

Jessica Silver and her husband paid $3,500 in extermination fees after a dog indicated there were bedbugs throughout their row house in Brooklyn. They got rid of 40 garbage bags full of clothes and baby toys that they feared were infested and their Pottery Barn queen-size bed. But Silver continued to get bitten, and she called another exterminator, John Furman of Boot-a-Pest, based on Long Island, who spent two hours combing through her bedroom, where the biting was taking place, only to find no traces of bedbugs, alive or dead.

The culprits, she eventually discovered, were rodent mites. Furman said the antibedbug treatment probably killed some mites but failed to eradicate their breeding grounds in the walls.

Silver did not want to name the bedbug-sniffing dog company she used.

After she posted details of her case on an online bedbug forum, she said a company representative threatened to sue her for slander, and the forum moderator took her post down.

“Everyone’s getting sucked into the whole bedbug pandemonium,’’ Silver said.

While many dog companies advertise an accuracy rate of 95 percent to 98 percent, that figure is taken from a 2008 clinical trial conducted under controlled conditions by an entomology team at the University of Florida. The findings do not necessarily reflect the success rate of individual companies’ dogs, operating in the real world with a lot more variables.

Dog experts say false positives can result from the poor training of a dog or its handler. The dog might become alert to a different type of insect, or the dog could be reacting to a cue from its handler.

False alerts can also be made by well-trained, highly attenuated dogs. Andrew Klein of Assured Environments, based in New York, said dogs might pick up on bedbug scents transmitted by clothes or wafting through ventilation from a neighboring apartment.

“The dog can’t tell us gradations of intensity,’’ Klein said.