US issues warnings on fat but pushes cheese sales 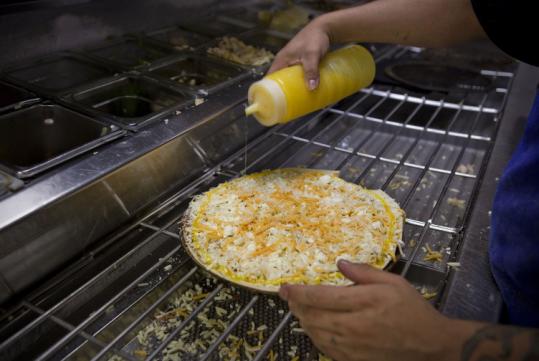 A Domino’s Pizza employee made one of the chain’s Wisconsin six-cheese pizzas in New York. Cheese has become the largest source of saturated fat in the American diet. (Katie Orlinsky/The New York Times)
By Michael Moss New York Times / November 7, 2010

Then help arrived from an organization called Dairy Management. It teamed up with Domino’s to develop a new line of pizzas with 40 percent more cheese and proceeded to devise and pay for a $12 million marketing campaign.

“This partnership is clearly working,’’ Brandon Solano, the Domino’s vice president for brand innovation, said in a statement.

But as healthy as this pizza has been for Domino’s, one slice contains as much as two-thirds of a day’s maximum recommended amount of saturated fat, which has been linked to heart disease and is high in calories.

And Dairy Management, which has made cheese its cause, is not a private business consultant. It is a marketing creation of the US Department of Agriculture, the same agency at the center of a federal antiobesity drive that discourages over-consumption of some of the very foods Dairy Management is vigorously promoting.

Urged on by government warnings about saturated fat, Americans have been moving toward low-fat milk for decades, leaving a surplus of whole milk and milk fat. Yet the government, through Dairy Management, is engaged in an effort to find ways to get dairy back into Americans’ diets, primarily through cheese.

Americans now eat an average of 33 pounds of cheese a year, nearly triple the 1970 rate. Cheese has become the largest source of saturated fat; an ounce of many cheeses contains as much saturated fat as a glass of whole milk.

When Michelle Obama implored restaurateurs in September to help fight obesity, she cited the proliferation of cheeseburgers and macaroni and cheese.

“I want to challenge every restaurant to offer healthy menu options,’’ she told the National Restaurant Association’s annual meeting.

But in a series of confidential agreements approved by agriculture secretaries in both the Bush and Obama administrations, Dairy Management has worked with restaurants to expand their menus with cheese-laden products. Consider the Taco Bell steak quesadilla, with cheddar, pepper jack, mozzarella, and a creamy sauce.

“The item used an average of eight times more cheese than other items on their menu,’’ the Agriculture Department said in a report, extolling Dairy Management’s work — without mentioning that the quesadilla has more than three-quarters of the daily recommended level of saturated fat and sodium.

Dairy Management, whose annual budget approaches $140 million, is largely financed by a government-mandated fee on the dairy industry. But it also receives several million dollars a year from the Agriculture Department, which appoints some of its board members, approves its marketing campaigns and major contracts and periodically reports to Congress on its work.

The organization’s activities, revealed through interviews and records, provide a stark example of inherent conflicts in the Agriculture Department’s historical roles as both marketer of agriculture products and America’s nutrition police.

In one instance, Dairy Management spent millions of dollars on research to support a national advertising campaign promoting the notion that people could lose weight by consuming more dairy products, records and interviews show. The campaign went on for four years, ending in 2007, even though other researchers — one paid by Dairy Management itself — found no such weight-loss benefits.

When the campaign was challenged as false, government lawyers defended it, saying the Agriculture Department “reviewed, approved and continually oversaw’’ the effort.

Dr. Walter C. Willett, chairman of the nutrition department at the Harvard School of Public Health and a former member of the federal government’s nutrition advisory committee, said: “The USDA should not be involved in these programs that are promoting foods that we are consuming too much of already. A small amount of good-flavored cheese can be compatible with a healthy diet, but consumption in the US is enormous and way beyond what is optimally healthy.’’

The Agriculture Department declined to make top officials available for interviews for this article, and Dairy Management would not comment. In answering written questions, the department said dairy promotion was intended to bolster farmers and rural economies and that its oversight left Dairy Management’s board with “significant independence’’ in deciding how best to support those interests.

The department acknowledged that cheese is high in saturated fat, but said that lower milk consumption had made cheese an important source of calcium.

In its reports to Congress, however, the Agriculture Department tallies Dairy Management’s successes in millions of pounds of cheese served.

“Both featured two slices of American cheese, a slice of pepper jack and a cheesy sauce,’’ the department said.