Income gap in US broadens to widest ever 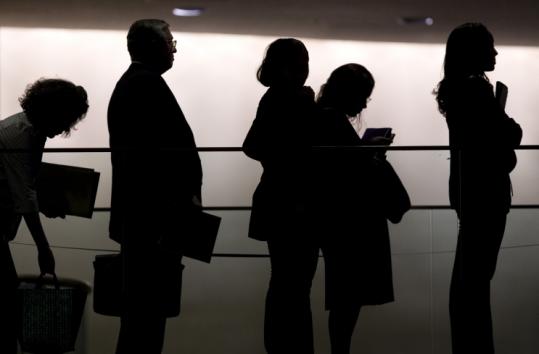 Job seekers lined up at a career fair. Average US commute times are down as fewer people go to work. (Mark Lennihan/Associated Press/File 2009)
By Hope Yen Associated Press / September 29, 2010

WASHINGTON — The recession seems to be socking Americans in the heart as well as the wallet: Marriages have hit an all-time low while pleas for food stamps have reached a record high and the gap between rich and poor has grown to its widest ever.

The long recession technically ended in mid-2009, economists say, but US Census data released yesterday show the painful, lingering effects. The annual survey covers all of last year, when unemployment skyrocketed to 10 percent, and the jobless rate is still a stubbornly high 9.6 percent.

The figures also show that Americans on average have been spending 36 fewer minutes in the office per week and are stuck in traffic a bit less. But that is hardly good news, either. The reason is largely that people have lost jobs or are scraping by with part-time work.

“Millions of people are stuck at home because they can’t find a job. Poverty increased in a majority of states, and children have been hit especially hard,’’ said Mark Mather, associate vice president of the Population Reference Bureau.

The economic “indicators say we’re in recovery, but the impact on families and children will linger on for years,’’ he said.

In the United States, marriages fell to a record low in 2009, with 52 percent of adults 18 and over saying they were joined in wedlock, compared to 57 percent in 2000.

The never-married included 46.3 percent of young adults 25-34, with sharp increases in single people in cities in the Midwest and Southwest, including Cleveland, Phoenix, Los Angeles, and Albuquerque. It was the first time the share of unmarried young adults exceeded those who were married.

Marriages have been declining for years due to rising divorce, more unmarried couples living together, and increased job prospects for women. But sociologists say younger people are also now increasingly choosing to delay marriage as they struggle to find work and resist making long-term commitments.

In dollar terms, the rich are still getting richer, and the poor are falling further behind them.

The income gap between the richest and poorest Americans grew last year by the largest margin ever, a stark divide as Democrats and Republicans spar over whether to extend Bush-era tax cuts for the wealthy.

At the top, the wealthiest 5 percent of Americans, who earn more than $180,000, added slightly to their annual incomes last year, the data show. Families at the $50,000 median level slipped lower.

Three states — New York, Connecticut, and Texas — and the District of Columbia had the largest gaps between rich and poor. Big gaps were also evident in large cities such as Boston, New York, Miami, Los Angeles, and Atlanta, home to both highly paid financial and high-tech jobs as well as clusters of poorer immigrant and minority residents.

“Income inequality is rising, and if we took into account tax data, it would be even more,’’ said Timothy Smeeding, a University of Wisconsin-Madison professor who specializes in poverty. “More than other countries, we have a very unequal income distribution where compensation goes to the top in a winner-takes-all economy.’’

Lower-skilled adults ages 18 to 34 had the largest jumps in poverty last year as employers kept or hired older workers for the dwindling jobs available. The declining economic fortunes have caused many unemployed young Americans to double up in housing with parents, friends, and loved ones, with potential problems for the labor market if they don’t get needed training for future jobs, he said.

Homeownership declined for the third year in a row, to 65.9 percent, after hitting a peak of 67.3 percent in 2006. Residents in crowded housing held steady at 1 percent, the highest since 2004, a sign that people continued to “double up’’ to save money.

Average commute times edged lower to 25.1 minutes, the lowest since 2006, as fewer people headed to the office in the morning. The share of people who carpooled also declined, from 10.7 percent to 10 percent, while commuters who took public transportation were unchanged at 5 percent.

The number of US households receiving food stamps surged by 2 million last year to 11.7 million, the highest level on record, meaning that 1 in 10 families was receiving the government aid. In all, 46 states and the District of Columbia had increases in food stamps, with the largest jumps in Nevada, Arizona, Florida, and Wisconsin.