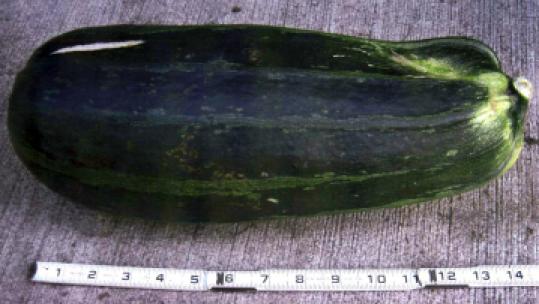 A Montana woman hit a 200-pound bear in the head with this zucchini. (Missoula County Sheriff via Ap)
Associated Press / September 24, 2010

HELENA, Mont. — A Montana woman fended off a bear trying to muscle its way into her home yesterday by pelting the animal with a zucchini.

The woman, who declined to be identified, suffered minor scratches and one of her dogs was wounded after tussling with the 200-pound bear.

The attack happened just after midnight when the woman let her three dogs into the backyard, Missoula County Sheriff’s Lieutenant Rich Maricelli said. Authorities believe the black bear was just 25 yards away, eating apples from a tree.

Before she knew what was happening, the bear was on top of the dog and batting the collie back and forth, Maricelli said.

“She kicked the bear with her left leg as hard as she could, and she said she felt like she caught it pretty solidly under the chin,’’ Maricelli said.

She retreated into the house and tried to close the door, but the bear stuck its head and part of a shoulder in the doorway.

The woman held onto the door with her right hand. With her left, she reached behind and grabbed a 14-inch zucchini from the counter, Maricelli said.

She threw the vegetable. It struck the bear on the top of its head and the animal fled.