Accidents in US relatively rare, but often deadly 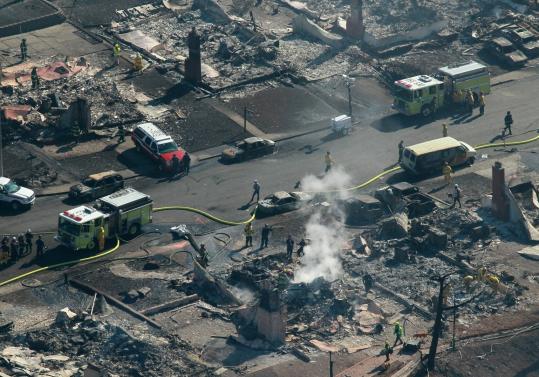 SAN BRUNO, Calif. — All that remained of some houses yesterday were chimneys, rising from still smoldering ruins. Burned-out cars sat along ash-covered streets. And a rescue worker with a dog searched door to door for missing people.

The day after a gas line ruptured and a towering fireball roared through a suburban San Francisco neighborhood, killing four people, officials were trying to determine what led to a blast that raised questions about the safety of similar lines that crisscross towns across America.

“It was pretty devastating,’’ Fire Chief Dennis Haag said. “It looks like a moonscape in some areas.’’

At least 50 people were hurt, with three suffering critical burns in the explosion Thursday evening that left a giant crater and laid waste to dozens of 1960s-era homes in the hills overlooking San Francisco Bay.

The utility that operates the 30-inch diameter line said it was trying to find out what caused the steel gas pipe to rupture and ignite.

Some residents said they smelled gas in the neighborhood during the past several weeks. The utility said it was checking its records for complaints, but added that none of its crews were at work on the line Thursday.

Compared with the tens of thousands of miles of gas pipelines nationwide, accidents are relatively rare, but usually deadly.

In 2008, there were 44 significant accidents involving gas transmission or distribution pipelines, killing 365 people and injuring 1,553.

Transmission lines like the one that burst in San Bruno deliver natural gas from its source to distribution lines, which then carry it into neighborhoods before branching off into homes.

During the past two decades, there have been more than 5,600 significant pipeline accidents nationwide — including more than 1,000 in which someone was killed or required hospitalization, according to the Pipeline and Hazardous Materials Safety Administration.

More than 60 percent of the lines are 40 years old or older and almost half were installed in the 1950s and 1960s, according to a recent analysis by the Pipeline Safety Trust, a nonprofit advocacy group based in Bellingham, Wash.

Most of the older pipelines lack anticorrosion coatings that are prevalent in the industry today, said Carl Reimer, executive director of the trust, which was set up after a 1999 explosion that killed three people in Bellingham.

“The industry always says that if you take care of pipelines, they’ll last forever,’’ Reimer said. “But what we see over and over again is companies are not doing that, and corrosion and other factors are causing failures.’’

And once a high-pressure pipeline fails, he added, anything can trigger a deadly blast. A cigarette or rocks smashing as high-pressure gas shoots by. Even someone answering a cellphone can cause a spark, because it is battery-powered, Reimer said.

Jerry Hill, a California assemblyman who represents San Bruno and surrounding cities, said he has heard multiple reports from constituents who had alerted utility PG&E of gas odors in the neighborhood before the disaster.

The residents “deserve to know if PG&E used the correct procedures in the days and weeks leading up to this disaster,’’ Hill said.

PG&E President Chris Johns said the company has heard the reports of a gas odor in the area before the blast.

“Right now, we haven’t got confirmation about that, but we have records that we are going back right this minute to try to confirm what exactly those phone calls look like and when they occurred, and we will report back as soon as we know something,’’ he said.

By midafternoon yesterday, the utility could not confirm the residents’ reports of gas odors, but said it was “looking into it.’’

The damaged section of pipe was isolated and gas flow to the area was stopped. Haag said PG&E crews were still unable to reach the ruptured line yesterday because water covered it.

This is not the first time a deadly explosion occurred on a PG&E gas line. The utility has had 19 significant pipeline incidents since 2002, resulting in one fatality, according to trust records.