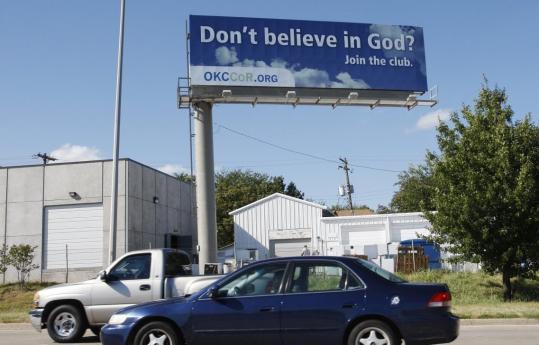 ATLANTA — Atheist activists from Wisconsin picked the biggest city in the Bible Belt for their largest advertising campaign, posting 50 billboards in metro Atlanta this week with messages including “Imagine No Religion.’’

The nonprofit Freedom From Religion Foundation, which says it is the largest organization of non-believers with 16,000 members, has placed billboards in about 45 cities in 30 states since October 2007, said said Annie Laurie Gaylor, the group’s co-president. The Atlanta billboards are part of a southern membership and education push.

“It’s a strategic place to begin this conversation,’’ said Derrick Lemons, an instructor in the Religion Department of the Franklin College of Arts and Sciences at the University of Georgia. “People in the area of the country especially will take offense to it and will start conversations which is, when it comes to marketing, a great thing to have.’’

Gaylor called the campaign “an intellectually responsible alternative,’’ to religious programming in the media. “Religion is winning by default. Why are we letting them dominate everything? You can turn on the television or radio 24/7 and be preached at,’’ she said.

The messages in Atlanta include, “God & Government: A Dangerous Mix’’ and “In Reason We Trust,’’ which is depicted on a penny replacing the word “God.’’ Another shows the face of actress Butterfly McQueen, who played Prissy in the 1939 Civil War movie classic “Gone With the Wind,’’ beside a quote in which she says, “As my ancestors are free from slavery, I am free from the slavery of religion.’’

The foundation purchased the Atlanta ad space at a bargain price from Outdoor, a division of CBS Corp., Gaylor said. She declined to disclose the price and a spokeswoman for CBS would not comment.

Many of the billboards are smaller than those typically seen on interstates and came at a better price because the foundation took what was available, Gaylor said.

Several of the billboards are in lower-income areas of Atlanta. One billboard, roughly 5 feet by 11 feet, reading, “Sleep in on Sundays,’’ was across the street from a church.

The foundation does not generally target churches for their billboards, Gaylor said.

It has sued over such religious displays as crucifixes in public parks and hires outside attorneys to litigate alleged violations of the separation of church and state.