Day of mixed signals on burning of Korans 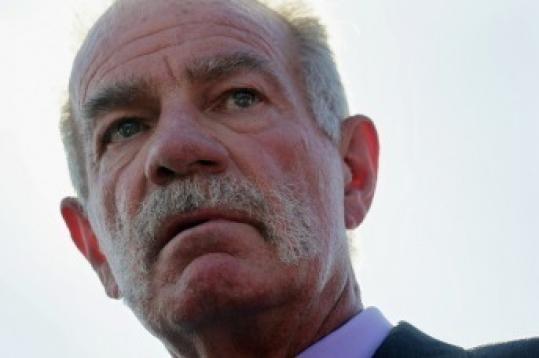 GAINESVILLE, Fla. — Terry Jones, the Florida minister who set the world on edge with plans to burn copies of the Koran tomorrow, said yesterday that he had canceled his demonstration because he had won a promise to move the mosque near ground zero to a new location.

But hours later, upon hearing from the project’s leaders in New York that no such deal existed, Jones backed away from his promise and said the bonfire of sacred texts was simply “suspended.’’

The sudden back and forth suggested that the controversy he started — drawing pointed criticisms from President Barack Obama and an array of leaders, officials, and celebrities in the United States and abroad — was not yet finished even after multiple appearances before the news media on the lawn of his small church. Jones seemed to be struggling with how to save face and hold onto the spotlight he has attracted for an act that could make him a widely reviled figure.

But Jones seemed to have been wrong or misled from the start.

Minutes after he announced the cancellation alongside Imam Muhammad Musri, a well-known Islamic leader in Florida who had been trying to broker a deal, Musri contradicted Jones’s account. He said that Muslim leaders of the project in New York had not agreed to find a new location. “The imam committed to meet with us but did not commit to moving the mosque yet,’’ Musri said.

Even that may not be accurate. Imam Feisal Abdul Rauf said in a statement that he had not spoken to Jones or Musri, who said later that he received the pledge of a meeting from a staff member in Abdul Rauf’s office.

The saga of Jones appears likely to continue — with more pressure likely to come as well.

In just the past week, the list of his critics had grown to include Obama, the Vatican, Franklin Graham, Angelina Jolie, Sarah Palin, dozens of members of Congress, and General David H. Petraeus, who was among the first to declare that the burning of Korans would put American soldiers and civilians in danger.

That risk of violence seemed to be rising, as large protests against Jones were staged over the past week in Kabul, Afghanistan, and Jakarta, Indonesia. It led the Obama administration to work furiously to end Jones’s plans.

Yesterday, FBI officials met with Jones, and even Obama waded into the fray, sharply criticizing what he called a “stunt’’ that would be a “recruitment bonanza for Al Qaeda.’’

“I just hope he understands that what he’s proposing to do is completely contrary to our values as Americans,’’ Obama said on “Good Morning America.’’ He added that it could “greatly endanger our young men and women in uniform who are in Iraq, who are in Afghanistan.’’

While Jones had told reporters that he wouldn’t “ignore’’ a call from the White House, administration officials decided that an appeal from the military would be more effective. The Obama administration also had to weigh the desire to stop Jones from going ahead with his plans versus the recognition the once-obscure preacher with a congregation of fewer than 50 people would get from a direct appeal from the president.

The call was brief, said Jones, adding that Gates was not the key factor in his decision. What swayed him, he said, was not the risk to Americans or foreigners but rather the promise that the Islamic center in New York would be moved.

As Jones walked back into his office, he said that the idea of the mosque as a bartering point came to him only after he had announced his “International Burn a Koran Day’’ in July. He said he had no regrets.

“We have accomplished what we think God asked us to do,’’ he said.

Those involved in the Islamic center project in New York offered contradictory stances and opinions yesterday, making it hard to determine if the parties involved had a common front.

In a brief interview yesterday, minutes before Jones made his cancellation announcement, Abdul Rauf, the imam, seemed to suggest that moving the project — at least the part of it that he is to lead, which includes a mosque, prayer spaces for other faiths, and tolerance education programs — was not out of the question.

When asked, without reference to Jones, whether the comments he made on “Larry King Live’’ on Wednesday night, that he would not have proposed the project had he known how much strife it would cause, indicated a new openness to moving or some other compromise, he said, “We are investigating that right now, we are discussing it right now, how we can resolve this issue in a manner that will defuse the rhetoric and the pain and also reduce the risk’’ of emboldening Muslim radicals.

He added: “We are weighing various options.’’

But the imam controls only one part of the project, known as Cordoba House, the interfaith and Muslim prayer spaces and tolerance programs that are planned as part of the larger community center, known as Park51.

Sharif el-Gamal, the head of the real estate group that owns the properties where the project is planned, offered a stronger denial.

“We’re not moving,’’ he said in an interview. He later issued a statement reiterating that.

In Gainesville, Jones seemed confused by the differing opinions. At first, after reporters read him Abdul Rauf’s statement denying that a deal had been made, Jones said he preferred to believe that the mosque would be moved.

He said he would be very disappointed if that did not turn out to be the case. As for whether he would go back to burning Korans, he seemed to go back and forth during multiple appearances before the news media. At one he said, “Right now, we are not even entertaining that idea.’’ But later he suggested he might reconsider.

Whether Jones does meet with the mosque leaders in New York, he has already elevated his profile, which has risen quickly from the small church he has run in Gainesville since around 2001.

It has been mostly empty during recent services, with no more than a few dozen congregants, many of them family members. But that began to change when news of his Koran-burning plans reached Muslim countries about a month ago. Suddenly, there was an overabundance of what Jones seemed to want — attention.