Migrants say crossing through Ariz. worth the risk

But many died amid record heat on desert journey 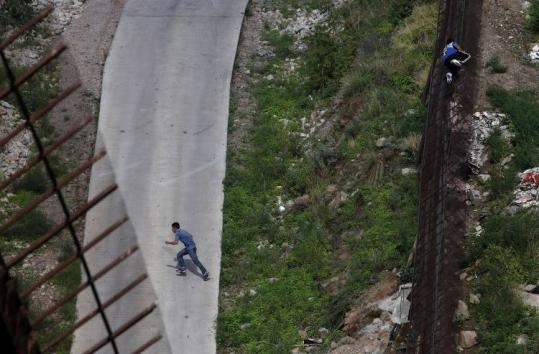 In July, migrants went over a border fence illegally in Nogales. With 59 deaths, the month was the second-deadliest recorded. (Jae C. Hong/Associated Press)
By Amanda Lee Myers and Julie Watson Associated Press / September 5, 2010

NOGALES, Mexico — Hector Ortega stumbled across the body of a fellow migrant as he walked across Arizona’s harsh desert in the searing summer heat. He tried not to look too closely.

With nothing to be done for the deceased, Ortega and the others trudged on, guided by a smuggler across the US border, determined to complete their illegal odyssey even as they endured record-high temperatures and fever-pitch resentment.

At 64, the farm laborer with a weathered face, strong hands, and silver hair protruding from his baseball cap was stoic about the body — someone’s journey cut short near a stand of scrub bush and cactus.

“What can you do about it in the desert?’’ he asked.

Deaths of illegal immigrants in Arizona have soared this summer toward their highest levels since 2005 — a fact that has surprised many who thought that the furor over the state’s new immigration law and the 100-plus degree heat would draw them elsewhere along the 2,000-mile US-Mexico border.

But at the Pima County morgue in Tucson, body bags are stacked on stainless-steel shelves from floor to ceiling. A refrigerated truck has been brought in to handle the overflow at the multimillion dollar facility.

In July, 59 people died — 40 in the first two weeks when nighttime temperatures were the hottest in recorded history, hovering around the low 90s. The single-month death count is second only to July 2005, when 68 bodies were found.

Of this July’s deaths, 44 were on the Tohono O’Odham Nation, a reservation the size of Connecticut that shares 75 miles of Arizona’s border with Mexico. The tribe is opposed to humanitarian aid on its lands, believing it invites violence.

Twenty-two more people died in the first 30 days of August.

Even with the prospect of a torturous death, and the bitter wrath they face in Arizona, immigrants, including Ortega, say the state’s vast, sparsely populated terrain is still the best place for border jumpers.

“In Tijuana, you have two walls that you have to get over,’’ said Ortega, who first came across in 1976 to work in West Coast agricultural fields. “This is much easier here. You just have to watch out for the snakes. That’s why I prefer to walk in the daytime and not at night.’’

He admits he’s afraid when he crosses, but states flatly, “It’s worth the risk.’’ Even though, after two days of traversing the desert, he and his group were caught by US Border Patrol agents when they reached a freeway and their ride was not there.

Resting at a shelter for failed border crossers that sits atop a steep hill in Mexico overlooking the city of Nogales, Ortega expanded on his motives. “It’s the only way to make a little money to support my family,’’ he said.

The shelter is a simple but large home with warnings about the dangers of crossing posted on its walls. It gives those who have been sent back across a hot meal of tortillas, rice, and beans, and bunk beds stacked three high.

One room has been converted to a chapel. On a recent night, a woman sobbed while another migrant tried to comfort her.

Ortega knows risks. He is from Apatzingan in Michoacan, where drug gangs have shot federal agents and terrorized the impoverished farm town.

Roberto Hernandez de Rosas, 18, quiet with a quick smile, said his family paid a smuggler $1,500 to take him and his brother across the Arizona desert and on to Los Angeles.

Hernandez’s brother had made the trip three times and the smuggler told them Arizona was still the easiest place to cross.

He was told it would cost twice as much to cross from Tijuana, where smugglers sell immigrants fake documents to walk through the port of entry.

“The town where I’m from, it’s like being in jail, it’s like a death,’’ said Hernandez, from the impoverished southern state of Puebla. “You have to think twice about crossing the desert, but when you don’t have any money, you need to look for a better life.’’

Hernandez and his brother were spotted by a Border Patrol helicopter. Authorities returned Hernandez to Mexico but his brother was jailed because he had been deported before.

Hernandez had been at the shelter for a few days waiting for his brother to be released. After that, Hernandez said he wanted to go back home.

But he expected his brother to try another crossing because his 2-year-old son is in Los Angeles.