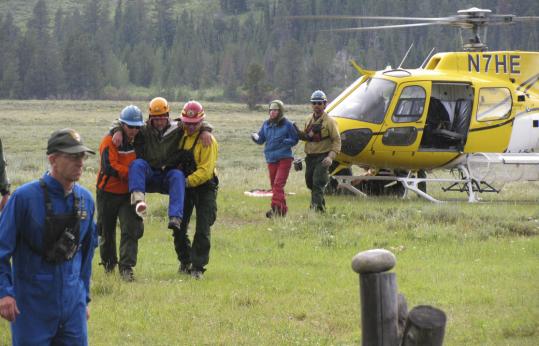 Grand Teton rangers helped climbers hurt in a lightning storm, after they called for help with a cellphone. While some national park visitors put gadgets to good use, others get into trouble. (Grand Teton National Park via New York Times)
By Leslie Kaufman New York Times / August 22, 2010

NEW YORK — Cathy Hayes was cracking jokes as she recorded a close encounter with a buffalo on her camera in a recent visit to Yellowstone National Park.

“Watch Donald get gored,’’ she said as her companion hustled toward a grazing one-ton beast for a closer shot with his own camera. Seconds later, as if on cue, the buffalo lowered its head, pawed the ground and charged, injuring, as it turns out, Hayes.

“We were about 30, 35 feet, and I zoomed in on him, but that wasn’t far enough, because they are fast,’’ she recounted later in a YouTube video displaying her bruised and cut legs.

The national parks’ history is full of examples of misguided visitors petting bears, putting children on buffalos for photos, and dipping into geysers despite signs warning of scalding temperatures.

But today, as an ever more wired and interconnected public visits the parks in rising numbers, rangers say technology often figures into such mishaps.

People with cellphones call rangers from mountaintops to request refreshments or a guide. In Jackson Hole, Wyo., one lost hiker even asked for hot chocolate.

A French teenager was injured after plunging 75 feet this month from the South Rim of the Grand Canyon when he backed up while taking pictures. And last fall, a group of hikers in the canyon called in rescue helicopters three times by pressing the emergency button on their satellite location device. When rangers arrived the second time, the hikers explained that their water supply “tasted salty.’’

“Because of having that electronic device, people have an expectation that they can do something stupid and be rescued,’’ said Jackie Skaggs, spokeswoman for Grand Teton National Park.

“Every once in a while we get a call from someone who has gone to the top of a peak, the weather has turned, and they are confused about how to get down and they want someone to personally escort them,’’ Skaggs said. “The answer is that you are up there for the night.’’

The National Park Service does not keep track of what percentage of its search and rescue missions, which have been climbing for the past five years and topped 3,500 in 2009, are technology related. But in an effort to hone in on contributing factors to park accidents, the service recently added “inattention to surroundings’’ to causes like “darkness’’ and “animals.’’

The service acknowledges that the new technologies have benefits as well. They can and do save lives when calls come from people who really are in trouble.

The park service itself has put technology to use in countering the occasional unruliness of visitors. Last summer, several men who thought they had managed to urinate undetected into the Old Faithful geyser in Yellowstone were surprised to be confronted by rangers after their stunt. It turns out that the park had installed a 24-hour camera so people could experience Old Faithful’s majesty online. Viewers spotted the men in action and called to alert the park.

Far more common, park workers say, are visitors who arrive with cellphones or GPS devices and little else — sometimes not even water — and find themselves in trouble. Such visitors often acknowledge that they have pushed themselves too far because they believe that in a bind, the technology can save them.

It does not always work out that way.

“We have seen people who have solely relied on GPS technology but were not using common sense or maps and compasses, and it leads them astray,’’ said Kyle Patterson, a spokesman for Rocky Mountain National Park.