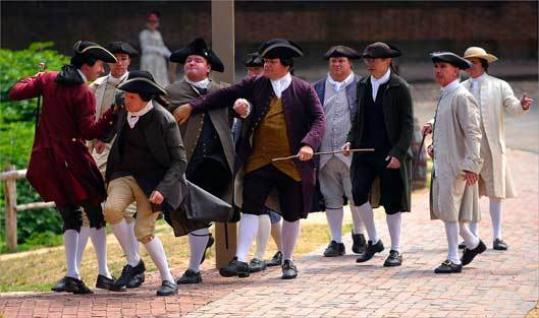 WILLIAMSBURG, Va. — The original Tea Party may have been in Boston, but some modern-day Tea Party activists are finding a powerful narrative this summer at a different historic landmark: Colonial Williamsburg.

Amid the history buffs and parents with young children wandering along the crushed shell paths of Virginia’s restored Colonial city, some noticeably angrier and more politically minded tourists can often be found.

They stand in the crowd listening closely as the costumed actors relive dramatic moments in the founding of our country. They clap loudly when an actor portraying Patrick Henry delivers his “Give me liberty or give me death’’ speech.

They cheer and hoot when General George Washington surveys the troops behind the original 18th-century courthouse. And they shout out about the tyranny of our current government during scenes depicting the nation’s struggle for freedom from Britain.

“General, when is it appropriate to resort to arms to fight for our liberty?’’ asked a tourist on a recent weekday during “A Conversation with George Washington,’’ a hugely popular dialogue between actor and audience in the shaded backyard of Charlton’s Coffeehouse.

Standing on a simple wooden stage before a crowd of about 100, the man portraying Washington replied: “Only when all peaceful remedies have been exhausted. Or if we are forced to do so in our own self-defense.’’

The tourist, a self-described conservative activist named Ismael Nieves from Elmer, N.J., nodded thoughtfully. Afterward, he said this was his fifth visit to Colonial Williamsburg.

“We live in a very dangerous time,’’ Nieves said. “People are looking for leadership, looking for what to do. They’re looking to Washington, Jefferson, Madison.’’

“I want to get to know our Founding Fathers,’’ he added. “I think we’ve forgotten them. It’s like we’ve almost erased them from history.’’

It is a common point of view among Tea Party movement activists. They say their unhappiness with Washington reflects how far the federal government has strayed, through taxation and regulation, from the Founding Fathers’ intentions.

“They all should come here and listen,’’ said Bob Rohrbacher, a retired plumber from Floral Park, N.Y., who opposes President Obama and was inspired to visit Williamsburg while watching Glenn Beck on Fox News. “They’ve forgotten about America.’’

Hundreds of visitors gather to listen to the “Revolutionary City’’ reenactments that take place throughout the day along the historic area’s Duke of Gloucester Street.

One day last week, Patrick Henry stood on the south side of the colonial Capitol building and announced that a congress of representatives from all the Colonies would begin meeting annually to protect the “united interests of America.’’

The cheers were so enthusiastic that the tourists themselves might have been mistaken for Colonists, were it not for the fanny packs and trilling cellphones.

One man — wearing a red, white, and blue golf shirt emblazoned with the American flag and the text of the Declaration of Independence — joined the actors in exclaiming, “Well said!’’ every time a character uttered something patriotic.

The executives who oversee Williamsburg said they have noticed the influx of Tea Partiers, and have also noted a rise in the number of guests who ply the costumed actors for advice about how to rebel against 21st-century politicians. (The actors do their best to provide 18th-century answers.)

“If people . . . can recognize that subjects such as war and taxation, religion and race, were really at the heart of the situation in the 18th century, and there is some connection between what was going on then and what’s going on now, that’s all to the good,’’ said Colin Campbell, president and chairman of Colonial Williamsburg. “What happened in the 18th century here required engagement, and what’s required to preserve democracy in the 21st century is engagement. That is really our message.’’

The foundation that runs the programs at Colonial Williamsburg is nonprofit and nonpartisan, so neither Campbell nor other employees would venture an opinion on the significance of the Tea Party movement. But they welcome the business.

Like most museums and historical sites, Williamsburg suffered during the recession; even before that, attendance had been dropping for more than a decade. In the late 1990s, annual ticket sales topped 1 million. Last year, that number had dropped to 660,000.