Brown will back financial overhaul

Support from 3 in GOP likely to seal passage; Vote, win for Obama could come this week 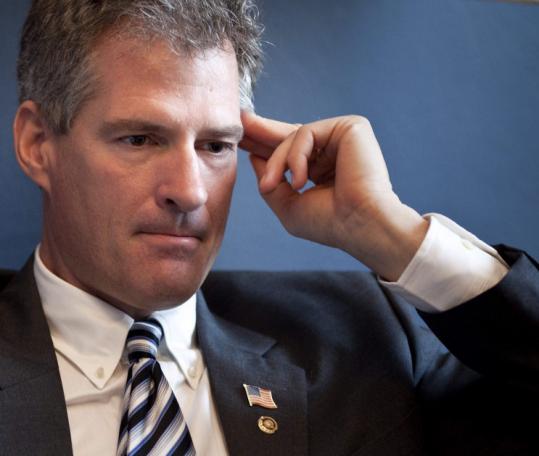 WASHINGTON — Senator Scott Brown yesterday helped put President Obama on the verge of a major political triumph by coming out in support of a massive financial regulation overhaul, probably giving Democrats enough votes to pass the landmark bill as early as this week.

“It includes safeguards to help prevent another financial meltdown, ensures that consumers are protected, and it is paid for without new taxes,’’ Brown said, adding, “further reforms are still needed to address the government’s role in the financial crisis.’’

Senate majority leader Harry Reid said he expected to hold a vote on the legislation this week, sending it to Obama for his signature.

The announcement by Brown, who many expected to help stifle the Democratic agenda, marks one of his most important decisions since arriving in Washington five months ago and enables the Massachusetts Republican to continue positioning himself as a potentially decisive vote.

He signed onto the legislation only after winning several changes that benefited Boston-based and Springfield-based MassMutual. He also used his leverage as a key swing vote to force top House and Senate lawmakers, including House Financial Services Committee chairman Barney Frank, to change how the bill is financed.

Although Democrats embraced Brown’s support of the financial regulation bill, they have so far not been able to win his support on legislation that would extend unemployment checks for millions of Americans and hundreds of thousands of Massachusetts residents. Reid is hoping to bring that issue up again this week. The unemployment extension failed two weeks ago by a single vote, and Brown opposed the measure because it would add to the deficit.

The financial reform overhaul, which resembles a plan outlined a year ago by President Obama, seeks to curb some of the types of risky trading that led to the economic collapse, increase government oversight and market transparency, and create an agency within the Federal Reserve to protect consumers from predatory lenders.

Republicans have largely opposed the bill, saying it does not fix some of the problems that contributed to the financial crisis, fails to add enough regulations to the housing industry, and reaches too far into private business operations.

The House version of the bill, written by Frank, a Democrat from Newton, was approved in December. The Senate version, written by Senator Christopher J. Dodd, Democrat of Connecticut, was approved in May. Brown was the decisive vote in the Senate, favoring the legislation only after winning assurances that the final bill would include a provision allowing State Street Corp. and other large banks to continue investing a portion of their money in the investment funds they manage.

The measure then went to a House-Senate committee where differences of the bill were to be resolved. Brown raised a new objection when he learned that Frank planned to pay for the legislation with a $19 billion tax on large financial institutions. Frank, who had worked closely with Brown throughout the negotiations, then came up with a new provision that would pay for the legislation through increased fees paid to the Federal Deposit Insurance Corp., and by using savings from an early termination of the 2008 bank bailout fund.

The House passed the final bill on June 30, sending it to the Senate. Brown said he wanted to continue studying the bill over the weeklong July 4 recess. Frank and Dodd’s decision to change the way the bill is paid for appeared to seal Brown’s support.

“I appreciate the efforts to improve the bill, especially the removal of the $19 billion bank tax,’’ Brown said yesterday in his statement. “As a result, it is a better bill than it was when this whole process started.’’

Brown’s aides declined to detail how he came to the decision to support final passage, other than to say that he read the bill and reviewed it with his staff. He also spent the week marching in July 4 parades, attending a fund-raiser in Nantucket, and, at one point, speaking with Senator John Kerry about the bill.

“This is a must-pass bill to protect consumers, and we need it passed right away,’’ Kerry, a Massachusetts Democrat, said yesterday in a statement that did not address his conversation with Brown. “I think Chris Dodd has the votes now, and he’s done a masterful job getting there.’’

Dodd yesterday hailed Brown for reaching across the aisle.

“During the debate on Wall Street reform, Scott Brown has demonstrated how bipartisanship is supposed to work,’’ Dodd said yesterday in a statement. “When he had concerns about the bill, he worked with members of both parties to see that they were addressed. There are too many people in the US Senate who think this job is about just scoring political points. Scott Brown has demonstrated he knows how to roll up his sleeves and get things done for Massachusetts and the country.’’

Democrats control 58 votes in the Senate, but one, Russ Feingold of Wisconsin, is opposed to the bill. That put Democrats three votes shy of the 60 needed to stop a filibuster.

As a result, four Senate Republicans who supported the initial version of the bill were courted for their votes. Three of them — Brown, Collins, and Snowe— now have publicly said they will support the final bill.

Senator Chuck Grassley, an Iowa Republican who backed the Senate version, has said he is concerned with some changes that were made to help pay for the bill, and Senate Democrats are not counting on his vote. A spokeswoman for Grassley did not respond yesterday for requests for comment.

Another possibility would be to delay the vote until West Virginia Governor Joe Manchin names a temporary successor to the late Senator Robert C. Byrd, who died last month.

Manchin said yesterday that he would fill the vacancy no earlier than Friday, and no later than Sunday.