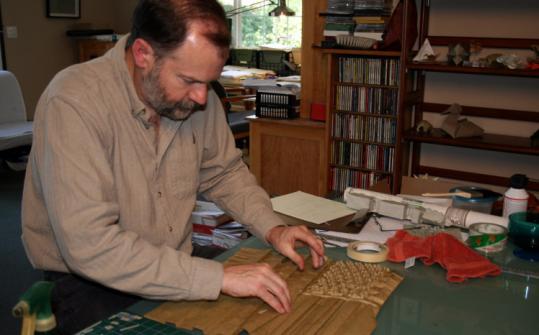 WASHINGTON — Robert J. Lang had a good career as a laser physicist. He worked at NASA’s Jet Propulsion Laboratory, researching semiconductor lasers used in fiber-optic communications, before switching to a private technology firm in Silicon Valley, where he held positions such as chief scientist and vice president of research. In 2001, he gave it all up — to fold paper.

Lang, 49, is an origami master. Paper cranes? Try a rattlesnake with 1,500 scales, a life-size replica of comedian Drew Carey, or an American flag that was photographed for The New York Times magazine.

Lang is pushing the limits of what one can make by folding paper, but he is also a leader in an emerging field of study called computational origami, which he boils down to this question: “How do you use rules and math to create an object of art?’’

“In both origami and science, you’re discovering patterns and relationships that, in a sense, already existed before we discovered them,’’ Lang says. “There’s a joy of discovery and of being the first explorer in this little nook.’’

He and others are using the Japanese art form to solve scientific problems. About 10 years ago, for instance, Lang collaborated with Lawrence Livermore National Laboratory to design a telescope lens that could go to space.

Origami principles were ideal for the task because, once in space, the lens, called the Eyeglass, needed to be big, about the size of a football field, but also small enough to be shot into orbit by a rocket.

A prototype demonstrated that hinged panes of glass could be used to fold the lens down to no more than about 13 feet without degrading performance. But the Eyeglass was never sent into space for lack of funding.

Lang has also worked on computer models for folding car air bags. Simulating air-bag deployment is important because otherwise auto manufacturers would have to crash a lot of cars to determine which ones are safe, an expensive prospect.

There are different genres of origami, so there are no rules, per se, but Lang mostly creates single-sheet origami without any cutting, taping, or gluing.

He isn’t the only math and science wonk enchanted by paper folding.

“I remember being 10 years old and unfolding an origami crane and looking at the crease pattern and thinking, ‘There are all these nice geometric lines and points. There’s got to be math here,’ ’’ recalls Tom Hull, associate professor of mathematics at Western New England College in Springfield, Mass. “But I had no clue what it was, because I was 10.’’

Today, Hull uses origami when he teaches, finding ways to tie it into concepts in calculus, number theory, geometry, and algebra. He says it is a quick way to engage his students and to help them understand vague concepts in a visual way. In 2006, he published “Project Origami,’’ a book filled with activities that teachers can use in math classes.

In 1996, Demaine was starting work on a doctorate in computer science at the University of Waterloo in Ontario (he was 15 at the time) and stumbled upon Lang’s work. “I thought: ‘Oh, that sounds cool. Maybe we can do something new.’ ’’