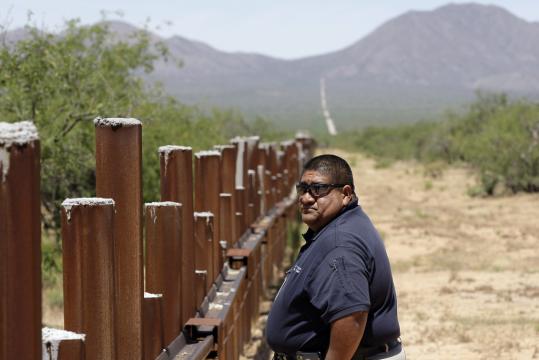 Sergeant Vincent Garcia of the Tohono O’odham Nation police walked along the fence at the US-Mexico border in San Miguel, Ariz. Smugglers use blowtorches and hacksaws to penetrate it. (Ross D. Franklin/ Associated Press)
By Jacques Billeaud Associated Press / May 30, 2010

NOGALES, Ariz. — The fence rises from the rock and hardscrabble of the desert floor, a formidable 15-foot-high curtain of corrugated metal that stretches into the mirage of heat and distance. Newer sections feature 20-foot-high steel columns, deeply planted, narrowly spaced, so no human slips between.

The start-and-stop span — 646 miles long — has become a fierce polemic, a bumper sticker, a popular backdrop for campaign commercials during an election year with another sulfurous immigration debate.

The best-known TV spot features Senator John McCain of Arizona, a Republican, kicking along a dusty road in this hilly border city, fuming to his companion, the Pinal County sheriff, about drugs and immigrant smugglers and kidnappings. Wearing his Navy baseball cap and squinting into the sun, McCain could be rounding the corner to the gunfight at the OK Corral.

“Complete the danged fence,’’ he spits, his jaw drawing into a knot.

The government has spent $2.4 billion since 2005 to build the fence as it presently stands. And the prevailing political sentiment would appear to be, build it faster and higher.

But what McCain and other politicians often fail to point out is there’s no shortage of ways to get past the fence. Immigrants scale it with ladders. Smugglers use blowtorches and hacksaws to penetrate it. They use trucks with retractable vehicle ramps to roll pickups full of marijuana over the fence. They knock down vehicle barriers and erect lookalikes that are made out of cardboard and easy to move.

When backed up by border agents and surveillance technology, the fence can help reduce immigrant traffic or redirect it to other locales. But even some advocates for tougher enforcement say it’s unclear whether the fence cuts the number of illegal crossings.

“The whole point of the fence is to work in concert with other things, but, by itself, you can’t expect it to be the end-all and be-all,’’ said Steven Camarota, research director for the Center for Immigration Studies, which advocates for strict immigration laws.

An estimated 45 percent of America’s 12 million illegal immigrants came here legally on visas or border crossing cards and remained after their legal stays expired. The fence couldn’t have stopped that. And the fence doesn’t directly confront employers who fuel illicit crossings by hiring illegal immigrants.

Even so, at least one candidate in nearly all of Arizona’s top political races, including McCain’s, touts the fence as essential, or uses images of the barrier in campaign materials.

The fence covers about 30 percent of the 2,000-mile US-Mexico border, about one-third the length of the Great Wall of China. Nearly half of the fence sits in Arizona, the busiest gateway for illegal immigrants and marijuana, with the rest equally divided in California, New Mexico, and Texas. The government plans to build 6 more miles of fence by year’s end.

The Border Patrol declined to say how many times it has recorded fence breaches, but a government audit released last year reported thousands. Each breach costs an average of $1,300 to repair. On top of the price tag for building the fence, it will cost another $6.5 billion over the next 20 years to maintain it and related equipment.

Politicians focus on the fence, advocates from both sides of the debate say, because of its symbolic value. It allows voters to envision the government’s security efforts, and it’s a shield against the violence on the Mexican side.

The focus on the fence by political campaigns appears to be isolated mostly to Arizona, where a law set to take effect July 29 will order police to question anyone they suspect of being in the country illegally.

A gubernatorial candidate in New Mexico also used the fence as a backdrop in a campaign video. And just a day after entering Washington state’s Senate race against powerful Democrat Patty Murray, Republican Dino Rossi said recently that he wants to see a “tall fence with a high gate’’ for those who look to enter the United States illegally.

In Arizona, support for fence-building or images of the barrier can be found on the websites and campaign literature of at least one candidate in six of the state’s eight congressional races, the US Senate contest, and races for governor and attorney general.

Ben Quayle, a Republican candidate for an open congressional seat and son of Dan Quayle, former vice president, calls for building a continuous border fence as part of a broader strategy. One of Quayle’s competitors in the Republican primary, Ed Winkler, wrote an essay about his recent trip to the border and posted four photos of himself standing near the fence.

US Representative Raul Grijalva, a Democrat, said on his campaign website that the country’s immigration woes won’t be solved by building the fence and sending troops, but rather by a comprehensive immigration overhaul.

Border Patrol spokesman Lloyd Easterling said the fence represents one of several tools used in reducing the number of immigrant arrests by more than 50 percent over the last five years.