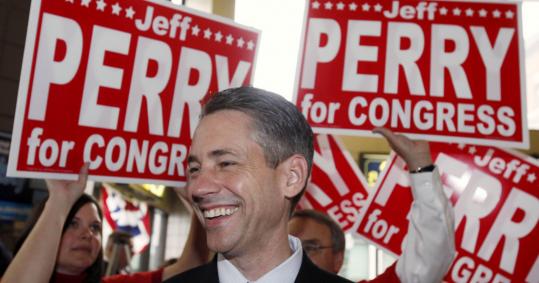 Republican congressional candidate Jeffrey D. Perry was involved, as a Wareham police sergeant in the early-1990s, in two instances in which an officer under his command conducted illegal strip searches of teenage girls, cases that are under new scrutiny as Perry’s political career advances.

In one case, Perry was the supervisor at the scene when the officer stuck his hand in a 14-year-old girl’s underwear, ostensibly searching for drugs. In the other, Perry accompanied the same officer to the house of a 16-year-old girl to tell her parents that she had voluntarily pulled down her pants to show she did not have any drugs.

Perry, now a state representative, was not charged in the cases, but the officer who searched the girls pleaded guilty to indecent assault and other charges and was sentenced to four years in prison. Perry was named as a defendant in civil cases brought by the girls’ parents, which were settled out of court.

“I did not observe anything inappropriate,’’ he said.

The Globe is not naming the victims at the request of family members.

Perry, a four-term legislator from Sandwich, is campaigning for the seat of US Representative William D. Delahunt, a Democrat who is not running for reelection. Perry, who is battling former state treasurer Joe Malone for the GOP nomination, has been endorsed by Senator Scott Brown and former governor Mitt Romney.

A review of court records and interviews indicates that Perry was a central figure in the strip search scandal that rocked the small town of Wareham nearly 20 years ago.

According to a civil complaint filed by the 14-year-old’s parents, the girl was with friends near a cranberry bog on May 22, 1991, when Wareham police officers pulled up, Perry among them.

One of the officers under Perry’s command asked the girl if she had any drugs. The officer, Scott Flanagan, then ordered her to unbutton her pants and threatened to arrest her.

“Flanagan then put his hand inside her underpants along her body,’’ the complaint says. He then ordered her to pull up her shirt until her breasts were exposed and turn around.’’ “This search was conducted in the glare of headlights and spotlights from the police cars,’’ the complaint states.

Perry “observed the strip search’’ but “did nothing to protect her,’’ the complaint states. No drugs were found.

Perry insisted he did not see it, and that neither the victim nor the witnesses said anything to him at the time. “It did not occur in my presence, and I have no knowledge of it,’’ he said.

The parents did not pursue charges, and the Wareham police did not discipline any of the officers involved.

Until it happened again.

On Dec. 31, 1992, Perry was the shift supervisor when Flanagan approached a 16-year-old girl behind a Tedeschi’s store and accused her of having marijuana. After she turned her pockets inside out, Flanagan ordered her to follow him behind a trash bin.

A civilian witness then intervened and demanded that Flanagan divulge his badge number. Flanagan stopped the search and let the girl go. Later that night, when Perry and Flanagan went to the girl’s house, Perry told her parents that officers had seen their daughter with a substance that looked like oregano on her shirt and that if it had been marijuana she could have gone to jail. When the girl’s parents asked if officers had found marijuana, Perry said they had not.

Perry, as he was headed out the door, said, “Oh, yeah, by the way, [she] pulled her pants down for us,’’ according to her parents’ sworn testimony. The parents said they interpreted the officers’ visit as an attempt to persuade them to keep quiet or risk having their daughter jailed.

Perry acknowledged yesterday that he made the statement to the girl’s parents about her pulling her pants down, but he said he was simply relaying to them what Flanagan had told him. He said Flanagan had notified him about the incident, and so he asked Flanagan to accompany him to the girl’s house to talk to her and her parents.

“I did what I think is good police work,’’ Perry said.

The parents complained the next day to the Police Department, which referred the allegations to State Police. Flanagan, who pleaded guilty in 1994 to violating both girls’ rights and to indecent assault of a child, has since left the state and could not be reached for comment.

Perry resigned from the department in June 1993, six months after the parents complained. He said yesterday that his departure was unrelated and that he left to start his own private investigation business. Perry produced a letter yesterday from the police chief at the time saying he was not under investigation or subject to disciplinary actions when he resigned.

Both girls’ families filed civil lawsuits against Flanagan, Perry, and the town of Wareham. The 14-year-old girl’s case was settled before trial. In the 16-year-old’s case, Perry was dismissed as a defendant prior to trial because he was not present during the strip search, but a jury found Flanagan and the town liable, awarding the girl’s family $50,000 in damages. That case, too, ended in a settlement.

In both settlements, there was no admission of wrongdoing.

Lawyer Howard Friedman, who represented both victims, said he remembers the cases “very well.’’ “The incidents with Sergeant Perry were part of the municipal liability claim, which was successful,’’ he said.

Perry said that although he was named as a defendant, he was never questioned and never appeared in court.

He said that although he was aware of the allegations against him, he did nothing to rebut them or clear his name, because he said allegations in civil law suits are not necessarily true.

The 14-year-old’s father said he was surprised and angry that Perry is running for Congress.

“There’s nowhere he should run except out of town,’’ he said.

Perry said that as a father, he would be angry, too, if a police officer assaulted his child. Still, Perry said he would not have done anything differently, even now, knowing that an officer under his command committed crimes against teenage girls. He placed the blame for the incidents on Flanagan.

“My reflection now, and I’m talking about Flanagan,’’ he said, “is people can be something to everyone’s face and be something else in other places.’’