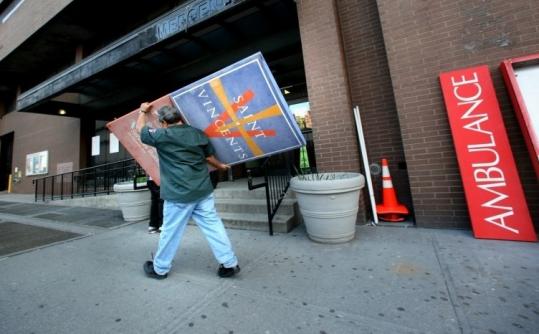 A worker walked away with the nameplate for St. Vincent’s Hospital in New York City after it shut permanently. (Bebeto Matthews/Associated Press)
Associated Press / May 1, 2010

Closed signs were posted on the hospital’s double doors at 8:15 a.m.

About 100 people — including nurses, doctors, other hospital workers, and neighborhood residents — had gathered by the time a large blue St. Vincent’s flag was removed from the emergency room doors. Some cried, while others took pictures of the building.

Furniture was being removed quickly from the main entrance while security guards looked on, keeping passersby out.

The hospital has been scaling down operations since filing for bankruptcy earlier this month, with debt topping $1 billion.

The city stopped sending ambulances to St. Vincent’s on April 9.

The hospital’s 3,500 employees got termination notices more than two weeks ago.

But several hundred stayed through yesterday morning to take care of dozens of patients, including walk-in emergency cases.

And then it was over.

A last Mass was celebrated in the hospital’s historic chapel, which is graced with Tiffany-style windows.

As Dr. Blanca Sckell walked into the chapel, she said she felt as if she were attending a funeral.

“A lot of the good work that has been done here is dying,’’ said Sckell, who had worked in community medicine at the hospital for three years.

Near an ambulance area, people placed a bouquet of white roses, a lit candle, and a card that read, “Your light shines on. Thank you, St. Vincent’s.’’

Since it opened in 1849, the famed Manhattan hospital had treated cholera victims, survivors of the Titanic, and hundreds of victims of the Sept. 11 attacks. It also was at the forefront of the early response to the AIDS epidemic.