Some soldiers find no relief in transition units 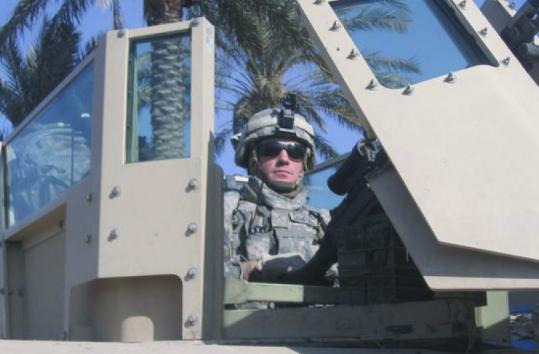 Specialist Michael Crawford is an Army sniper who is waiting to be medically discharged. He suffered two concussions in Iraq, and also saw platoon mates burn to death there.
By James Dao and Dan Frosch New York Times / April 25, 2010

COLORADO SPRINGS — A year ago, Specialist Michael Crawford wanted nothing more than to get into Fort Carson’s Warrior Transition Battalion, a special unit created to provide closely managed care for soldiers with physical wounds and severe psychological trauma.

A strapping Army sniper who once brimmed with confidence, he had returned emotionally broken from Iraq, where he suffered two concussions from roadside bombs and watched several platoon mates burn to death. The transition unit at Fort Carson seemed the surest way to keep suicidal thoughts at bay, his mother thought.

It did not work. He was prescribed a list of medications for anxiety, nightmares, depression, and headaches that made him feel listless and disoriented.

His weekly session with a nurse case manager seemed inadequate to him. And noncommissioned officers — soldiers supervising the unit — harangued or disciplined him when he arrived late to formation or violated rules.

Last August, Crawford attempted suicide with a bottle of whiskey and painkillers. By the end of last year, he was begging to get out of the unit.

“It is just a dark place,’’ said the soldier, who is waiting to be medically discharged from the Army. “Being in the WTU is worse than being in Iraq.’’

Created in the aftermath of the scandal in 2007 over shortcomings at Walter Reed Army Medical Center, Warrior Transition Units were intended to be sheltering way stations where injured soldiers could recuperate and return to duty or gently process out of the Army. There are about 7,200 soldiers at 32 transition units across the Army, with about 465 soldiers at Fort Carson’s unit.

But interviews with more than a dozen soldiers and health care professionals from Fort Carson’s unit, along with reports from other posts, suggest that the units are far from being restful sanctuaries.

For many soldiers, they have become warehouses of despair, where damaged men and women are kept out of sight, fed a diet of powerful prescription pills, and treated harshly by noncommissioned officers. Because of their wounds, soldiers in Warrior Transition Units are particularly vulnerable to depression and addiction, but many soldiers from Fort Carson’s unit say their treatment there has made their suffering worse.

Some soldiers in the unit, and their families, described long hours alone in their rooms, or in homes off the base, aimlessly drinking or playing video games.

“In combat, you rely on people and you come out of it feeling good about everything,’’ said a specialist in the unit. “Here, you’re just floating. You’re not doing much. You feel worthless.’’

At Fort Carson, many soldiers complained that doctors prescribed drugs too readily. As a result, some soldiers have become addicted to their medications or have turned to heroin. Medications are so abundant that some soldiers in the unit openly deal, buy, or swap prescription pills.

Heavy use of psychotropic drugs and narcotics makes it difficult to exercise, wake for morning formation, and attend classes, soldiers and health care professionals said. Yet noncommissioned officers discipline soldiers who fail to complete those tasks, sometimes over the objections of nurses and doctors.

At least four soldiers in the Fort Carson unit have committed suicide since 2007, the most of any transition unit as of February, according to the Army.

Senior officers in the Army’s Warrior Transition Command declined to discuss specific soldiers. But they said Army surveys showed that most soldiers treated in transition units since 2007, more than 50,000 people, had liked the care.

Those senior officers acknowledged that addiction to medications was a problem, but denied that Army doctors relied too heavily on drugs. And they strongly defended disciplining wounded soldiers when they violated rules. Punishment is meted out judiciously, they said, mainly to ensure that soldiers stick to treatment plans and stay safe.

“These guys are still soldiers, and we want to treat them like soldiers,’’ said Lieutenant Colonel Andrew Grantham, commander of the Warrior Transition Battalion at Fort Carson.

The colonel offered another explanation for complaints. Many soldiers, he said, struggle because they would rather be with regular, deployable units. In some cases, he said, they feel ashamed of needing treatment.

“Some come to us with an identity crisis,’’ he said. “They don’t want to be seen as part of the WTU. But we want them to identify with a purpose and give them a mission.’’

Sergeant John Conant, a 15-year Army veteran, returned from his second tour of Iraq in 2007 a changed man, according to his wife. Angry and sullen, he reported to the transition unit at Fort Carson, where he was prescribed at least six medications a day for sleeping disorders, pain, and anxiety, keeping a detailed checklist in his pocket to remind him of his dosages.

The medications disoriented him, Delphina Conant said, and he would often wander the house late at night before curling up on the floor and falling asleep. Then in April 2008, after taking morphine and Ambien, the sleeping pill, he died in his sleep. A coroner ruled that his death was from natural causes. He was 36.

Delphina Conant said she felt her husband never received meaningful therapy at the transition unit, where he had become increasingly frustrated and was knocked down a rank because of discipline problems. “They didn’t want to do anything but give him medication,’’ she said.