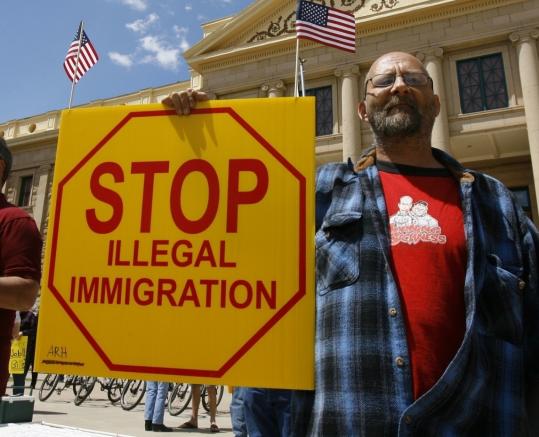 Opponents and supporters of the bill rallied yesterday at the state Capitol in Phoenix. The measure is slated to take effect by August but court challenges were expected immediately. (Nick Oza/The Arizona Republic via Associated Press)
By Randal C. Archibold New York Times / April 24, 2010

Even before she signed the bill at an afternoon news conference, President Obama strongly criticized it.

Speaking at a naturalization ceremony for 24 active-duty service members in the Rose Garden, he called for a federal overhaul of immigration laws, which congressional leaders signaled they were preparing to take up soon, to avoid “irresponsibility by others.’’ The Arizona law, he added, threatened “to undermine basic notions of fairness that we cherish as Americans, as well as the trust between police and our communities that is so crucial to keeping us safe.’’

The law, which proponents and critics alike said was the broadest and strictest immigration measure in generations, would make the failure to carry immigration documents a crime and give the police broad power to detain anyone suspected of being in the country illegally. Opponents have called it an open invitation for harassment and discrimination against Hispanics regardless of their citizenship status.

The political debate leading up to Brewer’s decision, and Obama’s criticism of the law — presidents very rarely weigh in on state legislation — underscored the power of the immigration debate in states along the Mexican border. It presaged the polarizing arguments that await the president and Congress as they take up the issue nationally.

Mexico’s Foreign Ministry said in a statement that it was worried about the rights of its citizens and relations with Arizona. The Catholic archbishop of Los Angeles called the authorities’ ability to demand documents Nazism.

As hundreds of demonstrators massed, mostly peacefully, at the capitol plaza, the governor, speaking at a state building a few miles away, said the law “represents another tool for our state to use as we work to solve a crisis we did not create and the federal government has refused to fix.’’

The law was to take effect 90 days after the legislative session ends — meaning by August. Court challenges were expected immediately.

Hispanics, in particular, who were not long ago courted by the Republican Party as a swing voting bloc, railed against the law as a recipe for racial and ethnic profiling.

“Governor Brewer caved to the radical fringe,’’ a statement by the Mexican American Legal Defense and Educational Fund said, predicting that the law would create “a spiral of pervasive fear, community distrust, increased crime, and costly litigation, with nationwide repercussions.’’

While police demands of documents are common on subways, highways, and in public places in some countries, including France, Arizona is the first state to demand that immigrants meet federal requirements to carry identity documents legitimizing their presence on American soil.

Brewer acknowledged critics’ concerns, saying she will work to ensure that the police have proper training to carry out the law. But she sided with arguments by the law’s sponsors that it provides an indispensable tool for the police in a border state that is a leading magnet of illegal immigration. She said racial profiling will not be tolerated, adding, “We have to trust our law enforcement.’’

Brewer and other elected leaders have come under intense political pressure here, exacerbated by the killing of a rancher in southern Arizona by a suspected smuggler a couple of weeks before the state Legislature voted on the bill. His death was invoked Thursday by Brewer as she announced a plan urging the federal government to post National Guard troops at the border.

President George W. Bush had attempted to overhaul immigration laws but failed when his own party split over the issue.