Families told it is unlikely there are more survivors 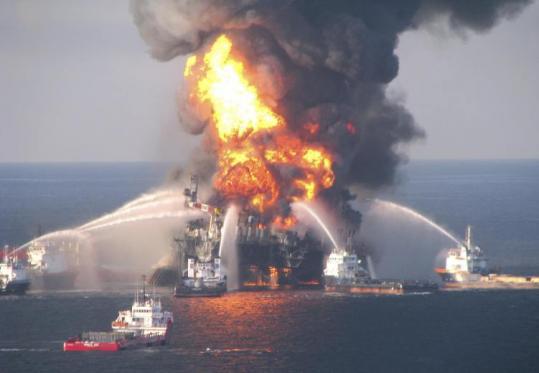 Crews battled the blazing oil platform in an image captured Wednesday but released yesterday. The rig has since sunk. (US Coast Guard)
By Kevin McGill and Holbrook Mohr Associated Press / April 23, 2010

NEW ORLEANS — A deep-water oil platform that burned for more than a day after a massive explosion sank into the Gulf of Mexico yesterday, creating the potential for a major spill as it underscored the slim chances that the 11 workers still missing survived.

The sinking of the Deepwater Horizon, which burned violently until the gulf itself extinguished the fire, could unleash more than 300,000 of gallons of crude into the water every day. The environmental hazards would be greatest if the spill were to reach the Louisiana coast, some 50 miles away.

Crews searched by air and water for the missing workers, hoping they had managed to reach a lifeboat, but one relative said family members have been told it is unlikely any of the missing survived Tuesday night’s blast. More than 100 workers escaped the explosion and fire; four were critically injured.

Carolyn Kemp of Monterey, La., said her grandson, Roy Wyatt Kemp, 27, was among the missing. She said he would have been on the drilling platform when it exploded.

“They’re assuming all those men who were on the platform are dead,’’ Kemp said. “That’s the last we’ve heard.’’

A fleet of supply vessels had shot water into the rig to try to control the fire enough to keep it afloat and keep oil out of the water.

Officials had previously said the environmental damage appeared minimal, but new challenges have arisen now that the platform has sunk.

The well could be spilling up to 336,000 gallons of crude oil a day, Coast Guard Petty Officer Katherine McNamara said. She said she didn’t know whether the crude oil was spilling into the gulf. The rig also carried 700,000 gallons of diesel fuel, but that would probably evaporate if the fire didn’t consume it.

Coast Guard Rear Admiral Mary Landry said crews saw a 1-mile-by-5-mile sheen of what appeared to be a crude oil mix on the surface of the water. She said there was no evidence crude oil was coming out after the rig sank. Officials have dispatched a vessel to check.

The oil will do much less damage at sea than it would if it hits the shore, said Cynthia Sarthou, executive director of the Gulf Restoration Network.

Doug Helton, incident operations coordinator for the National Oceanographic and Atmospheric Administration’s office of response and restoration, said any spill is not expected to come onshore in the next three to four days.

Oil giant , which contracted the rig, said it has mobilized four aircraft that can spread chemicals to break up the oil and 32 vessels, including a big storage barge, that can suck more than 171,000 barrels of oil a day from the surface.