Firm that owns site has history of violations 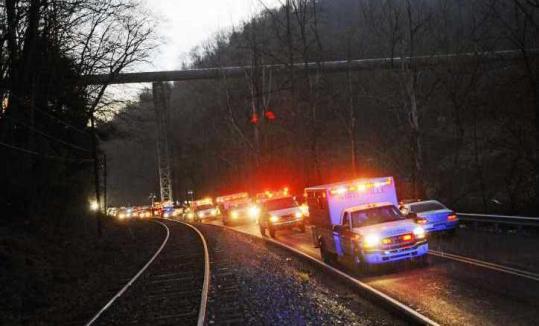 MONTCOAL, W.Va. — An explosion at a remote coal mine with a history of safety problems killed 25 workers and at least four others were still missing early this morning more than a thousand feet underground in the worst US mine disaster since 1984.

Rescuers had been making their way to the area where the miners were believed trapped at Co.’s sprawling Upper Big Branch mine, where the blast occurred around 3 p.m. yesterday. However, safety officials said at a news conference that the search was suspended because rising methane gas levels in the mine made it a high risk for another explosion.

Earlier, Kevin Stricklin, an administrator for the federal Mine Safety and Health Administration, said officials hoped some of the missing survived the initial blast and were able to reach airtight chambers stocked with food, water, and enough oxygen for them to live for four days. Rescue teams, however, made it to one of two nearby shelters, and it was empty. The gas levels prevented them from reaching the second.

Massey Energy and safety officials confirmed that 25 bodies were found. The death toll had risen from seven earlier in the day to 12 at about midnight. A total of 29 miners were in the area when the blast happened, he said.

“It does not appear that any of the individuals made it to a rescue chamber,’’ Stricklin said at a news conference. “The situation is dire.’’

Ron Wooten, state mining director, said though the situation does not seem promising to reach the four still missing, rescuers wouldn’t give up.

Benny R. Willingham, 62, who was five weeks away from retiring, was among those killed in West Virginia, said his sister-in-law Sheila Prillaman.

He had mined for 30 years, the last 17 with Massey, and planned to take his wife on a cruise to the Virgin Islands next month, she said.

“Benny was the type — he probably wouldn’t have stayed retired long,’’ Prillaman said. “He wasn’t much of a homebody.’’

Prillaman said family members were angry because they learned of Willingham’s death after reading it on a list Massey posted, instead of being contacted by the company, which said it wouldn’t release names until next of kin were notified.

Though the cause of the blast was not known, the operation about 30 miles south of Charleston has a history of violations for not properly ventilating highly combustible methane gas, safety officials said.

Miners were leaving on a vehicle that takes them in and out of the mine’s long shaft when a crew ahead of them felt a blast of air and went back to investigate, Stricklin said.

They found nine workers, seven of whom were dead. Others were hurt or missing about a mile and a half inside the mine.

Massey Energy, a publicly traded company based in Richmond, has 2.2 billion tons of coal reserves in southern West Virginia, eastern Kentucky, southwest Virginia, and Tennessee, according to the company’s website. It ranks among the nation’s top five coal producers and is among the industry’s most profitable. It has a spotty safety record.

In the past year, federal inspectors have fined the company more than $382,000 for repeated serious violations involving its ventilation plan and equipment at Upper Big Branch, which is run by subsidiary Performance Coal Co. The violations also cover failing to follow the plan, allowing combustible coal dust to pile up, and having improper firefighting equipment.

The mine has had three other fatalities in the last dozen years.

Methane is one of the great dangers of coal mining, and federal records say the Eagle coal seam releases up to 2 million cubic feet of methane gas into the Upper Big Branch mine every 24 hours, which is a large amount, said Dennis O’Dell, health and safety director for the United Mine Workers labor union.