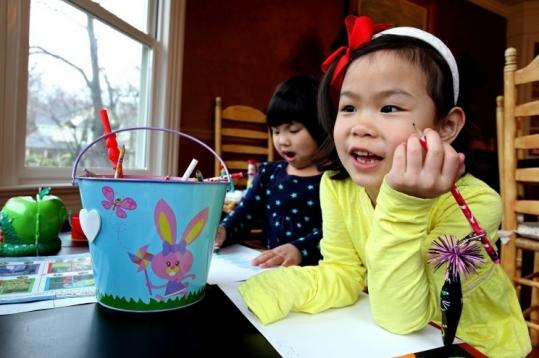 Olivia Durkin (right), 7, and her sister, Lucy, 5, drew on an activity table in their N.Y. home. They were adopted through a program that features special-needs children. (Craig Ruttle/Associated Press)
By David Crary Associated Press / April 3, 2010

NEW YORK — Not long ago, the choices facing Robert and Julie Garrett would have been simpler. Once they set their hearts on adopting a child from China, the odds were high they could soon bring home a healthy infant girl.

Faced with a long wait — and a smaller pool of healthy orphans available to foreigners — the Garretts have decided after much soul-searching to adopt one of the special-needs children who now abound in China’s orphanages.

The children’s conditions range widely. Some are correctible, some not: cleft lips and palates, congenital heart disease, missing or malformed limbs, impaired vision or hearing.

“It’s important for us to not take on more than we can handle,’’ Garrett said. “That process takes time — praying over it, discussing what medical needs you think you could take on.

“It’s a journey in itself just to decide if that’s the right direction to go.’’

Starting in the early 1990s, and as recently as a few years ago, the large majority of Chinese children adopted by foreigners were healthy baby girls abandoned by their parents, often because of a preference for a son in a country rigidly enforcing a one-child policy.

Circumstances have changed dramatically since then. China has eased its one-child policy, fewer baby girls are abandoned, domestic adoptions of healthy orphans have increased, and the waiting time for foreigners to adopt a healthy infant has tripled to roughly four years.

As a result, US adoptions from China have plummeted more than 60 percent, to 3,001 last year. And of the children now adopted, roughly three of every five have special medical needs.

One contributing factor is China’s rate of birth defects, which a government family planning commission said increased by nearly 50 percent between 2001-2006.

Amy Eldridge of the Oklahoma-based Love Without Boundaries Foundation, which oversees several programs to aid Chinese orphans, says many children with birth defects — boys as well as girls — are abandoned, and they comprise a majority of the orphan population.

“Some parents feel the child will bring bad luck to their family,’’ said Eldridge, who has traveled often to China. “And we’re seeing many poor families abandon children with medical needs in hopes they will get care.’’

The Garretts, in their 30s and without children, signed up in December 2008 for the traditional program that might lead to adoption of a healthy infant. But facing a long wait, they later entered the Waiting Child program, which features special-needs children and can complete an adoption in less than one year.

The Garretts — he’s an aluminum plant worker, she’s an office manager — have decided they’re not ready to take a child with a severe or incurable medical problem, so they’re seeking one with a correctible condition.

“We have reviewed a couple of children,’’ Julie Garrett said. “It’s grueling to look at their faces and try to make a decision if you could care for them, and come to the realization you’re not the best fit to be able to care for them the best they should be.’’

Bethany and Kevin Durkin, who live in the Westchester County suburbs of New York City, went through a similar decision process and are now parents of two girls adopted through the Waiting Child program.

Olivia, 7, had a weak, underused right arm when she was adopted in 2004, while Lucy, 5, had a cleft palate that was repaired through surgery soon after her adoption in November 2007.